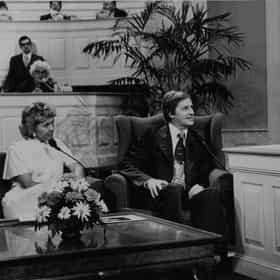 James Orsen Bakker (; born January 2, 1940) is an American televangelist, former Assemblies of God minister and former host (with his then-wife, Tammy Faye Bakker) of The PTL Club, an evangelical Christian television program. Bakker is also known for building Heritage USA in Fort Mill, South Carolina, a former Christian theme park which opened in 1978 and closed in 1989. He has written several books, including I Was Wrong and Time Has Come: How to Prepare Now for Epic Events Ahead. A cover-up of hush money paid to a church secretary, Jessica Hahn, for an alleged rape led to his resignation from the ministry. Subsequent revelations of accounting fraud brought about his conviction, ... more on Wikipedia

Jim Bakker is ranked on...

#104 of 1,042 Celebrity Death Pool 2020 42.7k VOTES They may be beloved performers, award winners, or game changers, but no matter how famous, you can’t escape death. This cele...
#9 of 23 The Most Drastic Falls From Grace Throughout History 28k VOTES Celebrities, politicians, royalty: we love learning about their lives, and sometimes we place them on a pedestal. But that o...
#217 of 1,452 Celebrity Death Pool 2018 477.7k VOTES Welcome to Celebrity Death Pool 2018! In increasingly uncertain times, there remains one constant in life - we all die. Cele...

Jim Bakker is also found on...