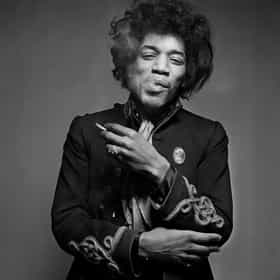 James Marshall "Jimi" Hendrix (born Johnny Allen Hendrix; November 27, 1942 – September 18, 1970) was an American rock guitarist, singer, and songwriter. His mainstream career lasted only four years, but he is widely regarded as one of the most influential guitarists in history and one of the most celebrated musicians of the 20th century. The Rock and Roll Hall of Fame describes him as "the greatest instrumentalist in the history of rock music".Born in Seattle, Washington, Hendrix began playing guitar at age 15. In 1961, he enlisted in the Army and trained as a paratrooper in the 101st Airborne Division, but he was discharged the following year. He moved to ... more on Wikipedia

Jimi Hendrix is ranked on...

Jimi Hendrix is also found on...