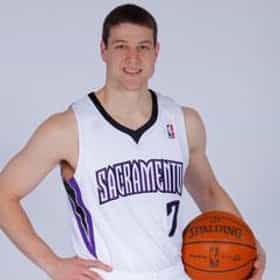 James Taft Fredette (born February 25, 1989) is an American professional basketball player for Panathinaikos of the Greek Basket League and the EuroLeague. Fredette was the 2011 National Player of the Year in college basketball after ranking as the leading scorer in all of NCAA Division I during his senior season for the BYU Cougars. He was subsequently selected with the tenth overall pick in the 2011 NBA draft, but only played limited minutes across four teams over five NBA seasons. He spent the majority of the 2015–16 season in the NBA Development League, during which he won the All-Star Game MVP. In 2016, he joined the CBA's Shanghai Sharks, and during the 2016–17 CBA season, he led ... more on Wikipedia

Jimmer Fredette is ranked on...

#115 of 157 The Best NBA Player Nicknames 162.6k VOTES This list includes the best NBA nicknames of current and retired NBA players. The top basketball players nicknames are on th...
#10 of 53 The Best NBA Players Who Played Overseas 3k VOTES Only the best basketball players in the NBA, but sometimes, the greatest NBA players take their talents overseas. Including ...
#147 of 158 The Greatest Point Guards in NBA History 200.7k VOTES Who are the greatest point guards in NBA history? Certain names stand out, including several players who are definitely amon...
#59 of 80 The Biggest Crybabies in Basketball 46.6k VOTES The biggest crybabies in basketball are the professional and college basketball players who constantly pout after a loss, bi...
#95 of 97 The Best Athletes of 2012 4k VOTES The best athletes of 2012 won Olympic gold medals, helped clinch team championships, broke world records and became some of ...
#35 of 41 The Biggest First Round NBA Draft Pick Busts 9.3k VOTES The biggest first round NBA Draft pick busts are those highly anticipated players who were selected very early in the NBA Dr...
#51 of 347 The Best NBA Players from New York 7.1k VOTES Here are the best NBA players from New York. Featuring Hall of Fame greats, superstars, and active players, this list o...
#33 of 51 The Best Athletes Who Wore #32 830 VOTES The best players to wear 32 as their jersey numbers are sprinkled across all major sports. It has been a popular jersey numb...
#2 of 22 The Greatest BYU Basketball Players Of All Time 246 VOTES The best BYU Cougars players ever have all had a part in making Brigham Young one of the top-tier Division I college pr...

Jimmer Fredette is also found on...