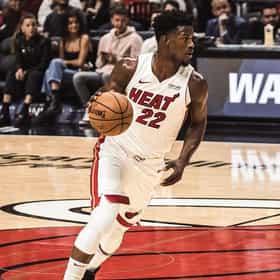 Jimmy Butler III (born September 14, 1989) is an American professional basketball player for the Miami Heat of the National Basketball Association (NBA). After playing one year of college basketball for Tyler Junior College, he transferred to Marquette University. He was drafted with the 30th overall pick in the 2011 NBA draft by the Chicago Bulls. Butler is a four-time NBA All-Star, a four-time NBA All-Defensive Team honoree, and a two-time All-NBA Team honoree. In 2015, he was named the NBA Most Improved Player. ... more on Wikipedia

Jimmy Butler is ranked on...

Jimmy Butler is also found on...