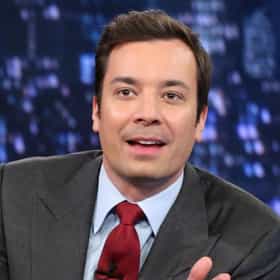 James Thomas Fallon (born September 19, 1974) is an American comedian, actor, television host, singer, writer, and producer. He is known for his work in television as a cast member on Saturday Night Live and as the host of late-night talk show The Tonight Show Starring Jimmy Fallon and before that Late Night with Jimmy Fallon. He grew up with an interest in comedy and music, moving to Los Angeles at 21 to pursue opportunities in stand-up comedy. He was commissioned to join NBC's Saturday Night Live as a cast member in 1998, fulfilling a lifelong dream. Fallon remained on SNL for six years between 1998 and 2004, co-hosting the program's Weekend Update segment and becoming a celebrity in ... more on Wikipedia

Jimmy Fallon is ranked on...

Jimmy Fallon is also found on...