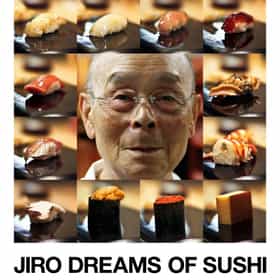 Jiro Dreams Of Sushi is a a 2011 documentary film directed by David Gelb. "An appetizing documentary in every sense, Jiro Dreams of Sushi follows 85-year-old master sushi chef Jiro Ono, paying lushly photographed homage to the process of preparing the artisan sushi that earned Ono’s esteemed Sukiyabashi Jiro restaurant three Michelin stars. From the complicated relationship between Jiro and his sons to the ins and outs of the tuna auction, this spirited film profiles all aspects of Jiro’s craft in tantalizing style and detail. In Japanese with English subtitles." Quoting the description from the 2011 Tribeca Film Festival site. ... more on Wikipedia

lists about Jiro Dreams Of Sushi

Jiro Ono From 'Jiro Dreams Of Sushi' Is Still Serving Some Of The Best Sushi In The World 295 views When searching for the best sushi in Japan, both locals and tourists will flock to the famous Sukiyabashi Jiro restaurant in...

Jiro Dreams Of Sushi is ranked on...

#94 of 182 The Best Movies of 2012 17.4k VOTES This is a list of the best movies of 2012, as ranked by experts and fans alike. The best movies of 2012 include gut-wrenchin...
#9 of 49 The Best Movies About Cooking 6.7k VOTES The films on this list of the best movies about cooking are ranked from best to worst based on your votes. This list feature...
#8 of 21 The Best Japanese Language Movies on Netflix 3.8k VOTES Japanese culture has long pervaded American mainstream cinema. It's not all Harijuku girls and anime, however. Some of the b...
#2 of 37 The Best Documentary Movies Streaming on Netflix 4.6k VOTES The Best Documentary Movies on Netflix is a complete Netflix streaming list for your perusal. All the best documentary films...
#4 of 50 The Best Documentaries About Business 543 VOTES This list is of the best business documentaries has been ranked by the community and includes popular and recognizable ...
#8 of 42 The Best Food Movies of All Time 2.6k VOTES A list of the best food movies. These are movies about food that feature dining as a central theme. We're sure we've include...