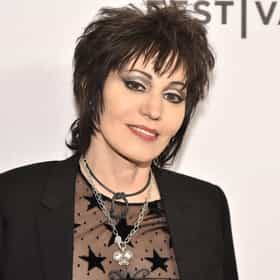 Joan Jett (born Joan Marie Larkin, September 22, 1958) is an American rock singer, songwriter, composer, musician, record producer and occasional actress. Jett is best known for her work as the frontwoman of her band, Joan Jett & the Blackhearts, and for earlier founding and performing with the Runaways, which recorded and released the hit song "Cherry Bomb". The Blackhearts' version of the song "I Love Rock 'n Roll" was number-one on the Billboard Hot 100 for seven weeks in 1982. Jett's other notable hit songs include "Bad Reputation", "Crimson and Clover", "Do You Wanna Touch Me (Oh Yeah)", "Light of Day", "I Hate ... more on Wikipedia

29 Pictures of Young Joan Jett 98.9k views This gallery features pictures of a sexy young Joan Jett, the rocker who rose to prominence in the early 80s. Many of these ...
Joan Jett Loves and Hookups 17.5k views Who is Joan Jett dating? Many famous men and women have dated Joan Jett, and this list will give you more details about thes...

Joan Jett is ranked on...

Joan Jett is also found on...