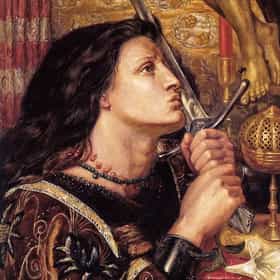 Joan of Arc (in French Jeanne d'Arc pronounced [ʒan daʁk]; c. 1412 – 30 May 1431), nicknamed "The Maid of Orléans" (French: La Pucelle d'Orléans), is considered a heroine of France for her role during the Lancastrian phase of the Hundred Years' War, and was canonized as a Roman Catholic saint. She was born to Jacques d'Arc and Isabelle Romée, a peasant family, at Domrémy in northeast France. Joan claimed to have received visions of the archangel Michael, Saint Margaret, and Saint Catherine of Alexandria instructing her to support Charles VII and recover France from English domination late in the Hundred Years' War. The uncrowned King Charles VII ... more on Wikipedia

Joan of Arc is ranked on...

#75 of 926 People who voted for Joan of Arc... Women are 2x more likely to vote for this People We Wish Were Still Alive 3.3M VOTES RIP to our world's greatest achievers, those who changed the way we live and the ways we thought. This list of people we wis...
#103 of 469 Famous Role Models We'd Like to Meet In Person 537.9k VOTES These are the famous folks it would be most exciting to meet in person, as ranked by the wisdom of the crowd. Some of the be...
#9 of 268 The Most Powerful Women Of All Time 181.8k VOTES This is a list of the most powerful women of all time, as ranked by experts and by fans alike. From world leaders to celeb...
#277 of 393 The Greatest Female Characters in Film History 219.3k VOTES List of the best female movie characters of all time, whether young or old. This list includes the best female movie charact...
#20 of 20 Historical Figures And The Actors Who Should Portray Them In A Biopic 212.9k VOTES Many of the elements that make history exciting are the same ones that make movies worth watching: heroism, scandal, intelli...
#16 of 30 The 30 Biggest Badasses In History 20.9k VOTES When you think of the biggest badasses in history, who comes to mind? Rambo, Stone-cold Steve Austin, maybe even t...
#6 of 15 Who Is The Toughest Female Warrior In History? 754 VOTES When it comes to pitting warriors against each other on the battlefield, it's common to think of men. Yet there have be...
#9 of 87 People who voted for Joan of Arc... People outside of the US are 2x more likely to vote for this People Who Made the World a Better Place 57.9k VOTES This is a list of famous people who helped heal the world. Some people have been acknowledged for their efforts with No...
#16 of 19 19 Things People Accomplished When They Were Teenagers 5.2k VOTES Ah, the teenage years! A time when most of us were stressing over prom dates or searching the drug store for the right acne ...
The Coolest Statues And Monuments Dedicated To Female Warriors 920 VIEWS History is full of amazing women who have overcome enormous odds to do something truly triumphant. However, it's relatively ...
Firsthand Descriptions Of What 14 Historical Figures Really Looked Like 29.1k VIEWS For better or worse, history often paints its major players in ways that bear little resemblance to reality. Do any of us tr...
12 Times Women Disguised As Men Made History 28.4k VIEWS It’s a man’s world, or so the old saying goes. Though women in history haven’t always been able to fight in wars, publish bo...
Mystics of Major Historical Importance 25.2k VIEWS Some of history's most influential mystics have had a massive impact, while others have left barely a trace in the register ...
16 Famous People Who Probably Died as Virgins 1.6M VIEWS This list of famous people who probably died as virgins is loosely ranked by fame and popularity. Several famous people and ...
#4 of 51 The Most Important Female World Leaders of All Time 1.5k VOTES Throughout history, there have been many female world leaders who have made a profound impact on the world. From presid...
People Executed by Burning 19.2k VIEWS A lit of people who have been executed utilizing fire as a form of capital punishment. The practice of killing people as a f...

Joan of Arc is also found on...