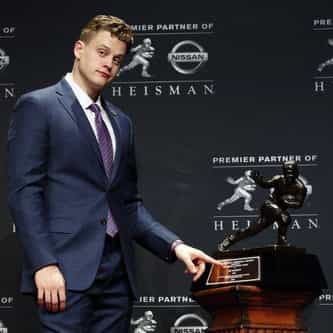 Joseph Lee Burrow (born December 10, 1996) is an American football quarterback for the LSU Tigers. Before transferring to LSU, Burrow began his collegiate career at Ohio State. In 2019, his second and final season with LSU, Burrow threw for over 5,600 yards with 60 touchdowns, the latter being the most in a single season in NCAA FBS history, while also leading LSU to victory in the 2020 National Championship Game. For his efforts that season, he won several awards and honors, including the ... more on Wikipedia

Joe Burrow IS LISTED ON