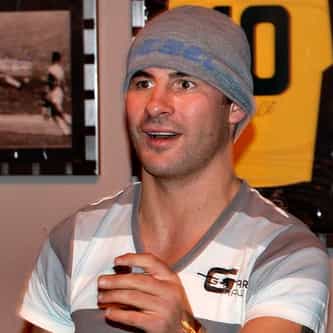 Joseph William Calzaghe, ( kal-ZAH-gee; born 23 March 1972) is a Welsh former professional boxer who competed from 1993 to 2008. He held world championships in two weight classes, including the unified WBA (Super), WBC, IBF, WBO, Ring magazine and lineal super-middleweight titles, and the Ring light-heavyweight title.Calzaghe is the longest-reigning super-middleweight world champion in boxing history, having held the WBO title for over 10 years and making 21 successful defences (the most ... more on Wikipedia

Joe Calzaghe IS LISTED ON

#93 of 206
22.2k VOTES The Best Boxers of the 20th Century
#34 of 188
327.8k VOTES The Best Boxers of All Time People outside of the US are 2x more likely to vote for this
#38 of 100
1.4k VOTES Who Is The Most Famous Joe/Joseph In The World?
Popular Film Actors from Wales Famous Athletes from Wales Famous Boxers from United Kingdom Famous Boxers from England Famous Male Athletes from Italy List of Famous Professional Boxers Famous Film Actors From Hammersmith Famous Film Actors From England