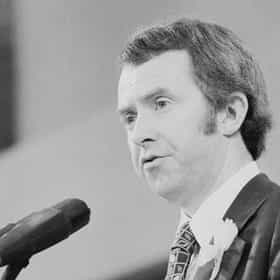 Charles Joseph "Joe" Clark (born June 5, 1939) is a Canadian elder statesman, businessman, writer, and politician who served as the 16th prime minister of Canada, from June 4, 1979, to March 3, 1980. Despite his relative inexperience, Clark rose quickly in federal politics, entering the House of Commons in the 1972 election and winning the leadership of the Progressive Conservative Party in 1976. He came to power in the 1979 election, defeating the Liberal government of Pierre Trudeau and ending sixteen years of continuous Liberal rule. Taking office the day before his 40th birthday, Clark is the youngest person to become Prime Minister. His tenure was brief as he only won a ... more on Wikipedia

Joe Clark is ranked on...

Famous People Whose Last Name Is Clark 8.2k VIEWS Being a fairly common name, it's no surprise there are a lot of famous people with the last name Clark. Do you recognize all...

Joe Clark is also found on...