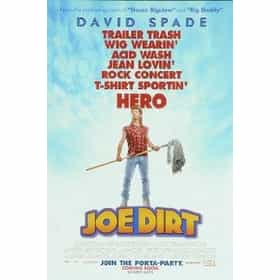 Joe Dirt is a 2001 American adventure comedy film starring David Spade, Dennis Miller, Christopher Walken, Brian Thompson, Brittany Daniel, Jaime Pressly, Erik Per Sullivan, and Kid Rock. The film was written by Spade and Fred Wolf, and produced by Robert Simonds. The plot concerns a "white trash" young man, Joe Dirt, who at first seems to be a "loser", a failure, an antihero. As he travels in search of his parents, his fine qualities are increasingly revealed. He ends up with a new "family" of close friends, people he has helped and who respect him. A sequel, Joe Dirt 2: Beautiful Loser, is scheduled to be released on Crackle in 2015. ... more on Wikipedia

The Best 'Joe Dirt' Quotes 1.1k votes List of the best Joe Dirt quotes, including images and videos of dialogue from each scene when available. Released in 2001...

Joe Dirt is ranked on...

Joe Dirt is also found on...