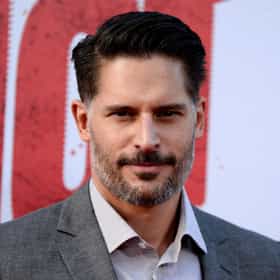 Joseph Michael Manganiello ( MANG-gə-NEL-oh; Italian: [maŋɡaˈnjɛllo], Neapolitan: [maŋɡaˈnjellə]; born December 28, 1976) is an American actor, director, and producer. His professional film career began when he played Flash Thompson in Sam Raimi's Spider-Man. His breakout role came in the form of werewolf Alcide Herveaux on five seasons of the HBO series True Blood, for which he was voted "Favorite Pop-Culture Werewolf of All Time" in 2011 by the readers of Entertainment Weekly and one of Men's Health's "100 Fittest Men of All Time".Manganiello is also known for his roles in films such as Magic Mike, Magic Mike XXL, Pee-wee's Big Holiday, What to Expect When You're ... more on Wikipedia

Joe Manganiello is ranked on...

#878 of 1,151 The Best Actors in Film History 2.2M VOTES The best actors ever are ranked here in this list of the best actors in film history. These are the greatest actors ever to ...
#94 of 440 The Hottest Male Celebrities 3.4M VOTES You love your boyfriend (husband? Lucky you!), but then there are these hot celebrity men. You see them and then you maybe f...
#144 of 244 The Hottest Men Of 2019, Ranked 2.6M VOTES This list rounds up the most handsome men of 2019. Some would say the most handsome man in the world was Brat Pitt,&nbs...
#25 of 31 Who Was America's Boyfriend In 2019? 300.1k VOTES UPDATED: Check out who is America's boyfriend in 2020! Let's face it, sometimes there are just those guys who are hard not...
#73 of 91 The Most Captivating Celebrity Eyes (Men) 483.6k VOTES List of the best eyes on male celebrities, ranked by appreciative fans. This list includes many of the hottest famous men ...
#452 of 770 American Public Figures Who Are National Treasures 224.7k VOTES America's national treasures work in different fields, are of different generations, and all have different stories to ...
#3 of 34 Actors Who Actually Look Better With Facial Hair 192.1k VOTES If there's one positive social contribution that came from the swing toward uber-hippie, 90s revivalism, it's that beards ha...
#5 of 29 Who Should Be The Next Wolverine? 11.7k VOTES Now that Hugh Jackman is definitely maybe probably finished with playing Wolverine in the X-Men movies, America needs to pul...
#21 of 51 The Most Handsome Actors of 2012 15k VOTES The most handsome actors of 2012 are those hot celebrities who provided ample eye candy during the year. These television an...
#3 of 24 Actors And Actresses You Want To See As Wolverine And X-23 10.1k VOTES Well, we knew it would have to happen eventually. A casting call will soon be put out for a new actor to play the role of Wo...
#3 of 22 The Most Beautiful Celebrity Couples 36.7k VOTES The most beautiful celebrity couples prove that when the hottest celebrities hook up with one another, dashingly beautiful (...
#2 of 19 The Hottest Guys on True Blood 6.9k VOTES Who are the hottest guys on True Blood? That's a tough question, because this HBO vampire drama is chock full of some o...
#8 of 45 The Male Celebrities With The Best Abs 245.6k VOTES Shirtless men are one of the biggest perks of the summer, and this list of the best celebrity abs is a showcase of the most ...
#9 of 50 50+ Actors You Forgot Were In Comic Book Movies 39.4k VOTES Over the years, some of the most celebrated actors in history have shown up on the big screen to star, to support, or even j...
#3 of 30 Famous Actors Who Almost Played Superman 7.4k VOTES Superman is one of the most iconic American characters of the 20th century, but for whatever reason he’s impossible to perfe...
#85 of 153 The Hottest Men Of 2018, Ranked 339.9k VOTES UPDATED: Check out the hottest celebrity men of 2019! Here are the most handsome men who won our hearts in 2018. Feat...
#2 of 27 The Hottest Male Strippers in Pop Culture 2k VOTES It's no secret that plenty of actresses have played memorable roles as strippers in hit movies. But what about us girls? Hmm...
#7 of 20 Actors Fit For The Job of Venom 27.6k VOTES Sony Studios owns the rights to the Spider-Man universe, and they have every intention of keeping it separate from Marvel. S...
#14 of 44 The Biggest Breakthrough Stars of 2012 3.3k VOTES The hottest breakthrough celebrities of 2012 include a wide variety of actors, actresses, musicians and TV stars who, for wh...
#21 of 37 The Most Handsome Actors of 2011 7.6k VOTES
#4 of 25 The Hottest Male Celebrity Butts 126.3k VOTES Famous men with nice rear ends: that's what this list is about. These are all fantastically attractive men with great a...
#15 of 63 The Hottest Guys of Summer 2012 Movies 12.4k VOTES The hottest guys of summer 2012 movies include veteran actors and several newcomers. All of them have one thing in common, t...
Famous Tall Men Over 6'2 444.6k VIEWS Some of the tallest men in Hollywood may not seem so on your screen. Paired alongside other tall actors, shorts actors weari...
Celebrities Who Had To Quit Drinking 505.5k VIEWS List of celebrities who quit drinking, loosely ranked by fame and popularity. Many celebrities have given up alcohol. Some o...
13 Celebrities Who Play 'Dungeons & Dragons' 61.9k VIEWS The Dungeons & Dragons tabletop RPG is finally garnering the recognition it deserves, cropping up in modern po...
#4 of 100 Who Is The Most Famous Joe/Joseph In The World? 865 VOTES Some famous NFL quarterbacks named Joe include Joe Montana and Joe Namath. Of the famous Josephs, you’ll likely recognize Th...
How to Pronounce Tricky Celebrity Names 16.2k VIEWS Not every celebrity name is as straight-forward as "Tom Hanks" and you won't find him anywhere near this list, whi...
Celebrity Steeler Fans 8.9k VIEWS The Pittsburgh Steelers are one of the most successful teams in the NFL, having won more Super Bowl titles and hosted more c...
The Hottest Celebrity Lumbersexuals 119.4k VIEWS First, there was the metrosexual. Then, the ubersexual. And now? The lumbersexual: a burly breed of man that is more into lo...

Joe Manganiello is also found on...