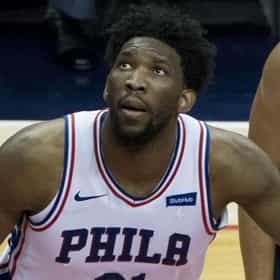 Joel Hans Embiid (born 16 March 1994) is a Cameroonian professional basketball player for the Philadelphia 76ers of the National Basketball Association (NBA). After one year of college basketball with the Kansas Jayhawks, he was drafted with the third overall pick in the 2014 NBA draft by the 76ers. Multiple foot and knee injuries delayed his debut for two seasons until 2016–17, when he was named to the NBA All-Rookie First Team despite playing only 31 games. Embiid has received two All-Star selections. He has nicknamed himself "The Process" in response to a refrain from 76ers fans during the Sam Hinkie era to "trust the process". ... more on Wikipedia

Joel Embiid is ranked on...

#79 of 153 The Best NBA Player Nicknames 155.2k VOTES This list includes the best NBA nicknames of current and retired NBA players. The top basketball players nicknames are on th...
#31 of 65 The Best NBA Players Of The 2010s 6.1k VOTES The best NBA players of the 2010s feature an array of legends continuing to write their legacies along with new stars breaki...
#27 of 107 The Best Foreign NBA Players of All Time 52.4k VOTES Since the late '80s, the NBA has imported the best players from across the globe to play basketball in America. Initially ...
#4 of 48 The Greatest Kansas Jayhawks Basketball Players of All Time 14.3k VOTES Many colleges have long-standing traditions of NCAA basketball that breed great talent for the NBA. When thinking of some of...
#1 of 51 The Best NBA Centers Right Now 89.8k VOTES The best current NBA centers aren't just the best men in the National Basketball Association to play the five position the b...
#4 of 38 The Best Centers of the 2010s 5.9k VOTES In the NBA, the best 2010s centers are the linchpin of the team. The "big man" is normally the tallest man on the ...
#71 of 202 The All-Around Best Athletes of 2018 32.8k VOTES When it comes to being an all-around best athlete, you're not just talking about the leading scorers of all time, or th...
#28 of 54 Everyone's Favorite New Celebrities Of 2019 67.7k VOTES Unfamiliar famous faces show up across your screens on a daily basis, strangers until they're stars, and in 2019 there seem ...
#14 of 320 The Top 100+ NBA Players Today 1.4M VOTES This list of the best basketball players in the NBA today ranks all of the league's current standout top players and NBA sta...
#4 of 39 The Greatest African NBA Players of All Time 13.8k VOTES Our list of African NBA players includes a group of famous names including Dikembe Mutombo, Serge Ibaka, Luc Mbah a Moute, a...
#67 of 102 The Best Rebounders in NBA History 25.5k VOTES The best rebounders in NBA history are those star players who dominated in the rebounds department during their long and suc...
#6 of 45 Who Will Be The 2019 NBA DPOY? 31.7k VOTES UPDATED: Vote for your 2020 NBA DPOY here! Utah Jazz center Rudy Gobert was named 2018-19 Defensive Player of the Year for...
#14 of 76 Who Will Win MVP Of The 2019 NBA Finals? 1.9k VOTES UPDATE: Kawhi Leonard was named Finals MVP for the second time in his career after leading the Toronto Raptors to a 4-2 seri...
#20 of 21 NBA Players Most Likely to be the 2017 MVP 37k VOTES Every year, the NBA names one player as the league's MVP. It's one of the highest honors in sports, given to the b...
#21 of 50 Who Will Be The 2019 NBA Most Improved Player? 46.8k VOTES UPDATE: Head over and check out the 2020 NBA Most Improved Player predictions. Toronto Raptors power forward Pascal Siakam...
#8 of 36 Which NBA Star Will Win His First Ring? 178 VOTES Every superstar in the NBA dreams of holding up the Larry O'Brien trophy at the end of the basketball season. But in the NBA...
#14 of 97 The Best Current NBA Dunkers 21k VOTES Who are the best dunkers currently in the NBA? Certainly, this list includes some of the best dunkers playing right now, and...
#3 of 71 The Best Current NBA International Players 20.5k VOTES With so many of the greatest NBA players of all time being from outside the US, it's time to recognize the best internationa...
Heartbroken Athletes React To Kobe Bryant's Death 372 VIEWS Kobe Bryant's tragic death in a helicopter crash, along with his daughter and seven other people, shook the sports world to ...
#20 of 50 The Best Current NBA Scorers 12.3k VOTES Who are the best scorers currently in the NBA? Certainly, this list includes some of the best offensive players pl...
The Biggest Flash-In-The-Pan Athletes And What They're Up To Now 2.1k VIEWS Joel Embiid's rookie season sparked a heated debate in the sports world about whether or not an athlete could be worthy...
#3 of 30 The Best Philadelphia 76ers Centers of All Time 1.3k VOTES Big fan of Philadelphia basketball? Then check out this list of Philadelphia 76ers centers with photos and seasons played wi...
#11 of 73 The Best Current NBA Defenders 53.4k VOTES Who are the best defenders currently in the NBA? Certainly, this list includes some of the best defensive players&...
#9 of 49 The Best Current NBA Shot Blockers 8.1k VOTES Who are the best shot blockers currently in the NBA? Certainly, this list includes some of the best rim protectors pl...
#13 of 33 The Best Athletes Who Wore #21 498 VOTES The best players to wear 21 on their jersey have helped make it one of the most beloved numbers in sports. There is great va...
#11 of 45 Who Will Win The 2020 NBA MVP Award? 17.8k VOTES Every 2020 NBA MVP award candidate is looking to leave is mark on the basketball world, and the top NBA MVP award candidates...
#4 of 15 The Biggest Floppers in NBA Today 11.3k VOTES Who are the best (worst) floppers currently in the NBA? Certainly, this list includes some of the best "actors&quo...
The Biggest Contracts in the NBA Right Now 5.7k VIEWS The biggest contracts in the NBA are only getting bigger as the league revolves more and more around superstars joining supe...
#1 of 11 The Best Kansas Players In The NBA, Ranked 54 VOTES The best Kansas Jayhawks players in the NBA are all part of a long history of talented professional players coming out ...

Joel Embiid is also found on...