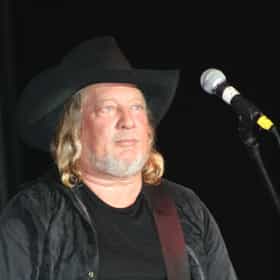 John David Anderson (born December 13, 1954 in Apopka, Florida) is an American country musician with a successful career that has lasted more than 30 years. Starting in 1977 with the release of his first single, "I've Got a Feelin' (Somebody's Been Stealin')", Anderson has charted more than 40 singles on the Billboard country music charts, including five number ones: "Wild and Blue", "Swingin'", "Black Sheep", "Straight Tequila Night", and "Money in the Bank". He has also recorded 22 studio albums on several labels. His newest album, Goldmine, was released on May 26, 2015, on the Bayou Boys Music label. Anderson was inducted ... more on Wikipedia

John Anderson is ranked on...

#61 of 217 The Best Male Country Singers of All Time 197.5k VOTES Update: Follow Ranker's official New Country 2020 playlist on Spotify! Americans have always had a soft spot for...
#26 of 44 The Best Country Singers with Deep Voices 5.2k VOTES Many country singers are known for their deep, baritone voices and this list documents the best country singers with a deep ...
#9 of 52 The Best Country Singers From Florida 478 VOTES Florida has played a vital role in the formation of many musical genres over the years. Several notable country stars were b...
Famous Jazz Trumpeters 47.4k VIEWS A List of Famous Jazz Trumpeters with photos! These are musicians who are masters of their craft. While it is often the sing...

John Anderson is also found on...