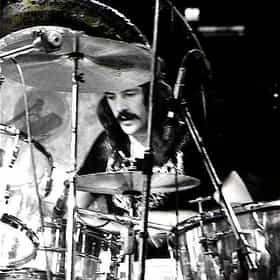 John Henry Bonham (31 May 1948 – 25 September 1980) was an English musician and songwriter, best known as the drummer for the British rock band Led Zeppelin. Esteemed for his speed, power, fast bass drumming, distinctive sound, and feel for the groove, he is regarded by many as the greatest and most influential rock drummer in history. In 2016, Rolling Stone magazine ranked him No. 1 in its list of the "100 Greatest Drummers of All Time". ... more on Wikipedia

John Bonham is ranked on...

#8 of 199 Rock Stars Whose Deaths Were The Most Untimely 267k VOTES Dead rock stars, ranked in order of how much potential great music was lost to this world by their untimely passing. Th...
#9 of 154 The Greatest Musicians Who Died Before 40 63.8k VOTES   Some of the best musicians in history only lived for a few short decades. This list ranks those musicians whose live...
#2 of 646 People who voted for John Bonham... also upvote The Dark Side of the Moon on The Greatest Albums of All Time also upvote Wish You Were Here on The Greatest Albums of All Time The Best Drummers Of All Time 667.7k VOTES Who is the greatest drummer ever? This is a list of the best drummers of all time, voted on and ranked by music lovers world...
#3 of 79 The Best Metal Drummers of All Time 55k VOTES A metal band is really only as good as their drummer. Unless they're Metallica. But, that's neither here nor there. So, here...
#2 of 4 Every Member of Led Zeppelin, Ranked Best to Worst 937 VOTES There's no denying that every musician in Led Zeppelin rocks. But who's the best rocker of them all? There are many factors ...
The Hook-Up List From Rock's #1 Groupie 266.1k VIEWS "Sweet Connie" Hamzy is one of the top rock groupies of all-time. She is already one of the most famous group...
Celebrities Who Died of Alcoholism 1.6M VIEWS This is a list of celebrities who died from their addiction to alcohol. While we may be more accustomed to celebrities dyi...
Musicians Who Died of Alcoholism 234.7k VIEWS While we may be more accustomed to musicians dying to heroin and other drugs, plenty have died due to an addiction to alcoho...
The Top Rock Bons 3.9k VIEWS A silly list I made to test an interface change.

John Bonham is also found on...