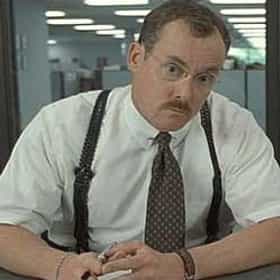 John Christopher McGinley (born August 3, 1959) is an American actor. He is most notable for his roles as Perry Cox in Scrubs, Bob Slydell in Office Space, Captain Hendrix in The Rock, Sergeant Red O'Neill in Oliver Stone's Platoon, Marv in Stone's Wall Street, and FBI agent Ben Harp in Point Break. He has written and produced for television and film. Apart from acting, McGinley is an author, a board member and international spokesman for the Global Down Syndrome Foundation, and a spokesman for the National Down Syndrome Society. ... more on Wikipedia

John C. McGinley is ranked on...

#4 of 20 The Top Actors Who Should Play J. Jonah Jameson 4.3k VOTES J. Jonah Jameson has been left out of the Marc Webb Spider-Man films, and for good reason. J.K. Simmons, who played the char...
#16 of 30 30 Amazing Actors Who Could Play Cable 56.3k VOTES Cable is the son of Cyclops and Jean Grey (well... Jean Grey's clone, but we won't get into that) and is of the X-Men who ...
Famous People Who Use Initials In Their Names 78k VIEWS Sometimes, people decide that they want to be called by their initials instead of their full names. Here is a list of famous...
Famous Film Actors Who Started on Stage 25.5k VIEWS Several famous film actors and actresses started their careers in theater. Some of these famous actors started in musicals o...
Famous People Who Have Kids with Down Syndrome 70.9k VIEWS Raising a child who has Down Syndrome can be a uniquely rewarding, but also challenging, experience for parents. Children bo...