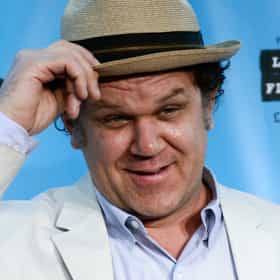 John Christopher Reilly (born May 24, 1965) is an American actor, comedian, singer, voice actor, screenwriter, and producer who made his film debut in Brian De Palma's war film Casualties of War (1989). Reilly gained exposure through his supporting roles in Days of Thunder (1990), What's Eating Gilbert Grape (1993), and The River Wild (1994). He also starred in Paul Thomas Anderson's films, Hard Eight (1996), Boogie Nights (1997), and Magnolia (1999). For his performance in Chicago (2002), Reilly was nominated for the Academy Award for Best Supporting Actor and the corresponding Golden Globe Award. He worked with director Martin Scorsese on both Gangs of New York (2002) and The Aviator ... more on Wikipedia

John C. Reilly is ranked on...

#218 of 282 The Best (Male) Actors Working Today 1.5M VOTES The best actors working today include Hollywood legends, Academy Award winners and many of the top up and coming actors in t...
#321 of 1,151 The Best Actors in Film History 2.2M VOTES The best actors ever are ranked here in this list of the best actors in film history. These are the greatest actors ever to ...
#225 of 514 Celebrities Nobody Cares About Anymore 3.4M VOTES Some of the greatest actors of all time have, in recent days, turned into a bunch of washed-up hacks that would be somehow b...
#300 of 2,003 People who voted for John C. Reilly... also upvote Star Wars Franchise on The Greatest Sci-Fi Movies of All Time also upvote Star Wars Franchise on The Best Space Movies The Greatest Actors & Actresses in Entertainment History 1.7M VOTES The best actors and actresses of all time, male and female, ranked by film fans worldwide. This list of greatest actors and ...
#32 of 266 The Greatest Male Celebrity Role Models 104k VOTES Male celebrities as role models... what are we looking for? Maybe someone who knows how to lead, be a good team member, or h...
#36 of 150 The Best Animated Voiceover Performances 143k VOTES This list contains information about the best animated voiceover performances in film, ranked by your votes. Several famous ...
#7 of 10 2019 Golden Globe Best Film Actor Nominees 155 VOTES It's awards season and the nominations for the 2019 Golden Globe best film actor are in so you can make your predictions on ...
#6 of 23 Who Will Win Best Actor At The 2019 Oscars? 3.3k VOTES The 2019 Oscar nominations are in but you can still rank your Best Actor Oscar predictions. There are several outs...
Every Person Who Has Hosted 'Saturday Night Live' 48.3k VIEWS Live from New York! It's Saturday Night! This is a list of all Saturday Night Live hosts, in reverse order,...
Famous People Named John 122.3k VIEWS There are a lot famous people named John out there. How many celebrities named John can you think of? The famous Johns ...
75+ Straight Celebrities Who Fight for Gay Rights 195.8k VIEWS You don't have to be gay to fight for gay rights, as the straight celebrities on this list have proven. Several famous strai...
Famous People Who Use Initials In Their Names 76k VIEWS Sometimes, people decide that they want to be called by their initials instead of their full names. Here is a list of famous...
Famous People of Irish Descent 36.5k VIEWS List of famous people of Irish descent loosely ranked by fame and popularity. Many great actors are of Irish descent. Some o...
Celebrities Who Went to Catholic School 25.6k VIEWS You might expect Hollywood A-listers to attend ritzy private academies, but you would be surprised how many famous actors, m...
Actors in the Most Martin Scorsese Movies 6.7k VIEWS Martin Scorsese is one of the best directors of all time. As such, he has worked with many great actors on multiple occ...
Celebrity Lakers Fans 297k VIEWS Go team! This is a list of celebrity Lakers fans, ranked by fame and popularity. The Los Angeles Lakers basketball team has ...
Famous Actors Who Starred on Stage Together 1.6k VIEWS This list contains information about celebrities who have starred on stage together, loosely ranked by fame and popularity. ...