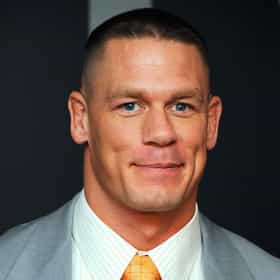 John Felix Anthony Cena Jr. (; born April 23, 1977) is an American professional wrestler, actor, rapper, and TV personality. As a wrestler, he is currently signed to WWE. As a TV personality, he is currently the host of Are You Smarter Than a Fifth Grader? on Nickelodeon. Cena was born and raised in West Newbury, Massachusetts. He moved to California in 1998, where he pursued a career as a bodybuilder before transitioning into professional wrestling in 1999 when he debuted for Ultimate Pro Wrestling (UPW). Cena soon signed with the World Wrestling Federation (WWF, now WWE) in 2000, and was initially assigned to Ohio Valley Wrestling (OVW). In WWE, Cena gained industry fame after ... more on Wikipedia

13 Things You Didn't Know About John Cena 21.2k views No one since Hulk Hogan (and, more recently, The Rock), has managed to parlay wrestling fame into mainstream celebrity like ...
The Best John Cena Movies 2.4k votes List of the best John Cena movies, ranked best to worst with movie trailers when available. John Cena's highest grossing mov...
John Cena Loves and Hookups 20.3k views Who is John Cena dating? Many famous women have dated wrestler and actor John Cena, and this list will give you more details...
The Best John Cena Matches on the WWE Network 499 votes Love him or hate him, John Cena has been the franchise player in WWE for over a decade and isn't looking to slow down any ti...
5 Things You Should Know About John Cena 3.5k views He's the franchise player of WWE and has been on top for over 15 years. He's a multi-time WWE champion and all-around good g...

John Cena is ranked on...

John Cena is also found on...