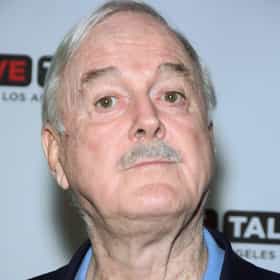 John Marwood Cleese (; born 27 October 1939) is an English actor, voice actor, comedian, screenwriter, and producer. He achieved success at the Edinburgh Festival Fringe and as a scriptwriter and performer on The Frost Report. In the late 1960s, he co-founded Monty Python, the comedy troupe responsible for the sketch show Monty Python's Flying Circus. Along with his Python co-stars Terry Gilliam, Eric Idle, Terry Jones, Michael Palin and Graham Chapman, Cleese starred in Monty Python films, which include: Monty Python and the Holy Grail (1975), Life of Brian (1979) and The Meaning of Life (1983). In the mid-1970s, Cleese and his first wife, Connie Booth, co-wrote the sitcom Fawlty ... more on Wikipedia

John Cleese is ranked on...

#65 of 403 The Funniest Stand Up Comedians Of All Time 1M VOTES A ranked list of the best stand up comedians in the history of the art form. First and foremost, all of the people on this l...
#685 of 1,041 Celebrity Death Pool 2020 102.3k VOTES They may be beloved performers, award winners, or game changers, but no matter how famous, you can’t escape death. This cele...
#209 of 1,145 People who voted for John Cleese... also upvote Harry Potter Franchise on The Most Rewatchable Movies The Best Actors in Film History 2.2M VOTES The best actors ever are ranked here in this list of the best actors in film history. These are the greatest actors ever to ...
#315 of 2,003 The Greatest Actors & Actresses in Entertainment History 1.7M VOTES The best actors and actresses of all time, male and female, ranked by film fans worldwide. This list of greatest actors and ...
#152 of 165 If You Fought To The Death, Who Would You Want By Your Side? 71.8k VOTES Fighting to the death. You know you’ve thought about it; pop culture has definitely made you consider it. In the e...
#629 of 1,471 The Greatest Minds of All Time 745.4k VOTES List of the Greatest Minds of All Time, throughout history. This list represents the most influential thinkers across variou...
#580 of 1,445 Celebrity Death Pool 2018 477.7k VOTES Welcome to Celebrity Death Pool 2018! In increasingly uncertain times, there remains one constant in life - we all die. Cele...
#214 of 862 People who voted for John Cleese... People in the Northeast are 2x more likely to vote for this Celebrity Death Pool 2016 370.1k VOTES Celebrity death pool 2016: Here's a large list of celebrities we think just might die this year. The only certainties in l...
#82 of 119 The Best Celebrity Partners to Have on a Game Show 91.6k VOTES Choosing the right partner in life is important. Choosing the right celebrity partner to have on a game show is way, way, ...
#19 of 65 Who Was America's Grandpa in 2015? 3.5k VOTES Grandfathers loom large over America. They teach us how to fish, how to ride a bike, and even how to whittle (depending on h...
#4 of 61 Celebrities You Want On Your Trivia Team 9k VOTES It’s easy to assume celebrities are not very intelligent and that they are just beautiful people reciting lines for our ente...
#19 of 24 Celebrities With Surprising College Degrees 3.9k VOTES Not every celebrity knew from the get-go they wanted to perform. Many future stars arrive at college without ...
Famous Tall Men Over 6'2 452.3k VIEWS Some of the tallest men in Hollywood may not seem so on your screen. Paired alongside other tall actors, shorts actors weari...
50+ Celebrities Who Have Appeared in Comic Books 9.4k VIEWS Comics are more popular than ever, and while some celebrities star in comic book movies, the celebrities on this list, loose...
Famous People Named John 126.1k VIEWS There are a lot famous people named John out there. How many celebrities named John can you think of? The famous Johns ...
Famous People Who Voiced Cartoon Characters 4.9M VIEWS   Everyone knows that Walt Disney, Mel Blanc, and Dan Castellaneta have provided the voices to iconic cartoon charact...
Famous Boarding School Alumni 39.8k VIEWS List of famous people who went to boarding school, loosely ranked by fame and popularity. For hundreds of years, rich and po...
300+ Famous People Who Went to Prep School 13k VIEWS Many of the most powerful people in the world went to prep school. The children of wealthy parents - often "old money&q...
Famous Men Who Married Much Younger Women 736.8k VIEWS List of Famous Men Who Married Much Younger Women, loosely ranked by fame and popularity. Many of Hollywood's leading men ha...
People Who Refused Prestigious Awards 28.2k VIEWS It's uncommon for recipients to turn down prestigious rewards, but that doesn't mean it doesn't happen. From&...
Some Of Your Favorite Celebrities Wrote Comic Books, And They're Not That Bad 50.8k VIEWS The celebrities on this list all wrote comic books but that's not what made any of them famous. If you're a superhero or com...
Actors Who Played Multiple Roles in the Same Film 77.2k VIEWS Several famous actors and actresses have played different characters in the same movie. Sometimes actors play characters who...
22 Huge Celebrities Who Turned Down Knighthoods 20.4k VIEWS These days, knights aren’t expected to live in castles, fight dragons, or rescue maidens, but the list of celebrities who tu...
Celebrities Who Turned 80 in 2019 7.7k VIEWS UPDATED: Check out the celebrities turning 80 in 2020! Several famous people celebrated their 80th birthdays in 2019....
James Bond Actors Who've Hated on the Bond Films 7.2k VIEWS By now, everyone knows how much Daniel Craig hates playing James Bond.  His face has been splashed all over the news wi...
20 Famous People Who Went to Law School 131.2k VIEWS This list of famous people who went to law school is loosely ranked by fame and popularity. Several famous actors, musicians...
20 Comedic Actors Who Have Been Nominated for Oscars 25.7k VIEWS Several famous comedic actors and actresses have been nominated for Oscars and a few of them have even taken home the award....

John Cleese is also found on...