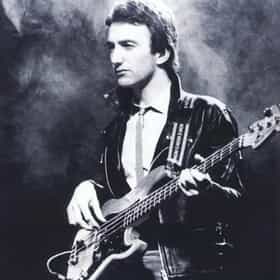 John Richard Deacon (born 19 August 1951) is an English retired musician, best known for being the bass guitarist for the rock band Queen. He composed several songs for the group—including Top 10 hits "You're My Best Friend", "Another One Bites the Dust", "Back Chat", and "I Want to Break Free"—and was involved in the band's financial management. Deacon grew up in Oadby, Leicestershire, playing bass in a local band, The Opposition, before moving to study electronics at Chelsea College, London. He joined Queen in 1971 on the strength of his musical and electronic skills, particularly the home-made Deacy Amp which guitarist Brian May used to create ... more on Wikipedia

John Deacon is ranked on...

#118 of 303 The Greatest Living Rock Songwriters 183.8k VOTES Update: Follow Ranker's official New Rock 2020 playlist on Spotify! Who is the best songwriter alive today? The ...
#7 of 74 The Best Rock Bass Player of the 1970s 22.6k VOTES Tune up and crack your fingers because this list compiles the best rock bass players of the '70s, ranked from best to worst ...
#172 of 862 People who voted for John Deacon... People in the Northeast are 3x more likely to vote for this Celebrity Death Pool 2016 370.1k VOTES Celebrity death pool 2016: Here's a large list of celebrities we think just might die this year. The only certainties in l...
30 Celebrities Who Quit Being Famous 1.8M VIEWS This is a list of celebrities who quit being famous, loosely ranked by fame and popularity. It seems like everyone want...
Famous Rhythm Guitarists 15.9k VIEWS A List of Famous Rhythm Guitarists with photos! These are musicians who are masters of their craft. While it is often the si...

John Deacon is also found on...