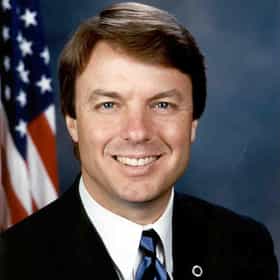 Johnny Reid "John" Edwards (born June 10, 1953) is an American lawyer and former politician who served as a U.S. Senator from North Carolina. He was the Democratic nominee for Vice President in 2004, and was a candidate for the Democratic presidential nomination in 2004 and 2008. Edwards defeated incumbent Republican Lauch Faircloth in North Carolina's 1998 Senate election. Towards the end of his single six-year term, he sought the Democratic Party's nomination in the 2004 presidential election. He eventually became the 2004 Democratic candidate for vice president, the running mate of presidential nominee Senator John Kerry of Massachusetts. Following Kerry's loss to ... more on Wikipedia

John Edwards is ranked on...

#8 of 23 The Most Drastic Falls From Grace Throughout History 29k VOTES Celebrities, politicians, royalty: we love learning about their lives, and sometimes we place them on a pedestal. But that o...
#9 of 220 Lying Politicians: The Worst Liars In American Politics 434.6k VOTES Do any politicians tell the truth anymore? Maybe, but you won't find them here. This list has the least trustworthy people i...
Celebrities Who Were Caught Cheating 7.4M VIEWS Hollywood stars may seem above it all, but they're still human. So of course it's devastating to their relationships when fa...
Famous Bilderberg Group Members 63.4k VIEWS List of Famous Bilderberg Members ranked by fame and popularity. The Bilderberg Group is an annual conference comprised of p...
30 Famous People Who Have Love Children 191k VIEWS Several famous actors, musicians, athletes, and politicians have love children. Some of these celebrities took responsibilit...
Famous People Whose Last Name Is Edwards 4.5k VIEWS Being a fairly common name, it's no surprise there are a lot of famous people with the last name Edwards. Do you recognize a...
14 Family Values Politicians with Illegitimate Children 13.8k VIEWS Most politicians claim to hold strong opinions about the ole of family values in politics. Often politicians will parade the...
Celebrity Scandals 2010: Celebrity Scandal List for 2010 380.1k VIEWS Full list of all 2010 celebrity scandals. 2010 has been a year for celebrity scandal so far, and this list will be updated a...
#15 of 31 The Best Newsweek Covers 455 VOTES List of the most memorable Newsweek Magazine covers, featuring the coolest photographs, sexiest celebrity shots, and most in...

John Edwards is also found on...