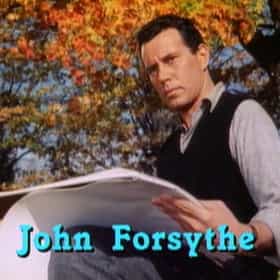 John Forsythe (born Jacob Lincoln Freund; January 29, 1918 – April 1, 2010) was an American stage, film/television actor, producer, narrator, drama teacher and philanthropist whose career spanned six decades. He also appeared as a guest on several talk and variety shows and as a panelist on numerous game shows. His 60-year acting career began in films in 1943. He signed up with Warner Bros. at age 25 as a minor contract player, but he later starred in films like The Captive City (1952). He co-starred opposite Loretta Young in It Happens Every Thursday (1953), Edmund Gwenn and Shirley MacLaine in The Trouble With Harry (1955), and Olivia De Havilland in The Ambassador's Daughter (1956). ... more on Wikipedia

John Forsythe is ranked on...

#308 of 337 The Coolest Actors Ever 735.2k VOTES As movie fans, we like to think of our favorite actors as being larger than life. With all of the coverage that these stars ...
#220 of 505 The Best TV Actors of All Time 107.2k VOTES The greatest TV actors of all time. Some of these actors have been in movies, some of them are even more well known at this ...
#36 of 54 The Best Emmy Hosts Ever 9k VOTES Hosting the Emmy awards is a tough gig. Just showing up for the Primetime Emmys requires wit and reflexes so Emmy hosts who ...
The Locations of All Hollywood Walk of Fame Stars 418k VIEWS A list of stars on the Hollywood Walk of Fame, with photos. This list includes all television and movie stars. Acquiring a s...
Golden Apple Most Cooperative Actor 742 VIEWS The Golden Apple Award for Most Cooperative Actor was awarded to those entertainers known for positive, helpful behavior on ...

John Forsythe is also found on...