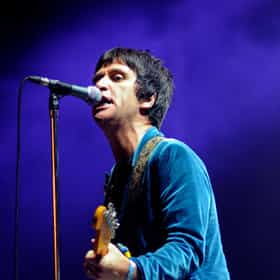 John Anthony Frusciante ( (listen); born March 5, 1970) is an American guitarist, singer, composer, and producer. He is best known as the former guitarist of the rock band Red Hot Chili Peppers, from 1988 until 1992 and from 1998 until 2009. He recorded five studio albums with them. Frusciante has an active solo career, having released twelve solo albums and five EPs; his recordings include elements ranging from experimental rock and ambient music to new wave and electronica. In 2015, Frusciante released his debut acid house album under his alias, Trickfinger. He has also recorded with numerous other artists, including the Mars Volta, for whom he was a studio guitarist (and occasional ... more on Wikipedia

John Frusciante is ranked on...

#133 of 303 The Greatest Living Rock Songwriters 183.6k VOTES Update: Follow Ranker's official New Rock 2020 playlist on Spotify! Who is the best songwriter alive today? The ...
#56 of 639 People who voted for John Frusciante... People under 30 are 2x more likely to vote for this also upvote Nevermind on The Greatest Albums of All Time The Greatest Guitarists Of All Time 642.9k VOTES The best guitarists of all time, voted on and ranked by tens of thousands of music fans, with photos and other info. Wi...
#27 of 64 The Most Musically Gifted Children of Musicians 27.6k VOTES The most musically gifted children of musicians have inherited their famous parents' natural abilities, and they've also bee...
#30 of 67 The Best Singers Who Kind Of Mumble 10k VOTES This is a list of the best singers who kind of mumble while singing, as ranked by experts and fans like you. Many of the mu...
#2 of 11 Every Member of Red Hot Chili Peppers, Ranked Best to Worst 2k VOTES Who is the best member of Red Hot Chili Peppers? It's a question only a diehard fan could answer. Luckily, this list ...
Famous People Who Have Been Through Depression 114.6k VIEWS This is a list of famous people with depression, or who have suffered from depression at some point in their lives. Who are ...
#11 of 114 The Best Lo-fi Bands/Artists 4.7k VOTES Lo-fi music has a number of definitions and classifications, but for the sake of this list, we're going to define lo-fi band...
10 Wild, Violent, And Tragic Stories From The Viper Room, The Legendary Bar Owned By Johnny Depp 1.1M VIEWS The Viper Room rose to Hollywood infamy after River Phoenix tragically overdosed there on Halloween night in 1993, and ...
Guitarists Who Went to Rehab 4.7k VIEWS This is a list of guitarists who went to rehab, with photos. Rehabilitation is no joke, yet when a celeb enters detox, we ca...

John Frusciante is also found on...