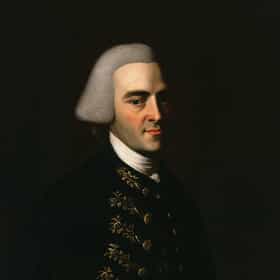 John Hancock (January 23, 1737 [O.S. January 12, 1736] – October 8, 1793) was an American merchant, statesman, and prominent Patriot of the American Revolution. He served as president of the Second Continental Congress and was the first and third Governor of the Commonwealth of Massachusetts. He is remembered for his large and stylish signature on the United States Declaration of Independence, so much so that the term "John Hancock" has become a synonym in the United States for one's signature.Before the American Revolution, Hancock was one of the wealthiest men in the Thirteen Colonies, having inherited a profitable mercantile business from his uncle. He began his political ... more on Wikipedia

John Hancock is ranked on...

#650 of 2,836 The Most Influential People of All Time 2.4M VOTES This is a list of the most influential people of all of human history. This means that the individuals on this list have had...
#554 of 1,472 The Greatest Minds of All Time 735.5k VOTES List of the Greatest Minds of All Time, throughout history. This list represents the most influential thinkers across variou...
#16 of 265 The Most Influential Politicians in American History 159.9k VOTES The most influential politicians in American history, ranked by everyone. Anyone can vote on this list, making these ranking...
#50 of 380 The Most Important Leaders in World History 939.7k VOTES For good or for bad, our leaders can be powerful forces for change in the world. But who are the most impaction people to ev...
#8 of 87 People who voted for John Hancock... also upvote Star Trek Franchise on The Greatest Sci-Fi Movies of All Time are 6x more likely to vote for Samuel Adams on this list The Best American Founding Fathers 28.8k VOTES The Founding Fathers of the United States of America boast luminary names like George Washington, Thomas Jefferson, Ben Fran...
#4 of 50 The 50 Hottest Founding Fathers 33.3k VOTES Hey, ladies and gentlemen. Are you poking around the Internet looking for some foxy new faces to ogle? Well, here is a list ...
#16 of 438 The Most Important Leaders in U.S. History 223.6k VOTES List of the most important leaders in U.S. history. Love 'em or hate 'em, these leaders shaped American history from its fou...
#2 of 27 The Coolest Celebrity Autographs 12.4k VOTES This list features only the coolest and most impressive celebrity autographs. They say that you can tell a lot from someone'...
Here's What Every Notable Presidential Election Loser Ended Up Doing With Their Life 16.4k VIEWS You thought finding a job in your field was hard?  Try running for president. President is arguably one of the most dif...
Famous People Named John 121.6k VIEWS There are a lot famous people named John out there. How many celebrities named John can you think of? The famous Johns ...
60+ Adopted Celebrities 506.2k VIEWS List of adopted celebrities, famous adoption people, celebrity adoptions, celebrity adoptees, famous adoptees, and famous pe...
Presidents Before George Washington 18.4k VIEWS Every school kid knows that George Washington was the first president of the United States, elected in April 1789, and leavi...
Famous Freemasons List 1M VIEWS List of Famous Freemasons ranked by fame and popularity. The Freemasons is a fraternal organization that has lodges all over...
Famous Sons of Liberty Members 8.1k VIEWS List of Famous Sons of Liberty Members ranked by fame and popularity. The Sons of Liberty was a group of American patriots w...

John Hancock is also found on...