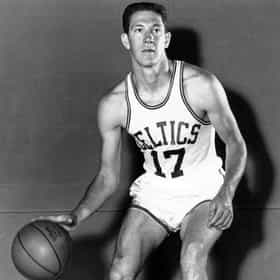 John Joseph Havlicek ( HAV-li-chek; April 8, 1940 – April 25, 2019) was an American professional basketball player who competed for 16 seasons with the Boston Celtics, winning eight NBA championships, four of them coming in his first four seasons. In the National Basketball Association he is one of four players to have won eight championships in their playing careers; only teammates Bill Russell and Sam Jones have won more, with 11 and 10 championships respectively. Havlicek is also one of three NBA players with an unsurpassed 8–0 record in NBA Finals series outcomes. Havlicek is widely considered to have been one of the greatest players in the history of the game and was inducted as a ... more on Wikipedia

John Havlicek is ranked on...

John Havlicek is also found on...