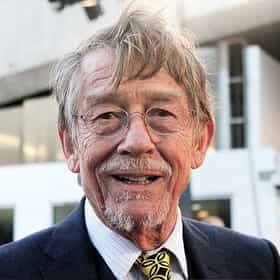 Sir John Vincent Hurt (22 January 1940 – 25 January 2017) was an English actor whose career spanned more than 50 years. Hurt came to prominence for his role as Richard Rich in the film A Man for All Seasons (1966) and gained BAFTA Award nominations for his portrayals of Timothy Evans in 10 Rillington Place (1971) and Quentin Crisp in television film The Naked Civil Servant (1975) – winning his first BAFTA for the latter. He played Caligula in the BBC TV series I, Claudius (1976). Hurt's performance in the prison drama Midnight Express (1978) brought him international renown and earned Golden Globe and BAFTA Awards, along with an Academy Award nomination. His BAFTA-nominated portrayal ... more on Wikipedia

John Hurt is ranked on...

#12 of 273 The Greatest British Actors of All Time 290.8k VOTES This list of the greatest British actors of all time has been ranked by fans of the films and TV shows in which these men ha...
#98 of 1,139 The Best Actors in Film History 2.3M VOTES The best actors ever are ranked here in this list of the best actors in film history. These are the greatest actors ever to ...
#19 of 115 The Best English Actors of All Time 79.9k VOTES Some of the best actors of all time hail from England, and whether you love these English men for their acting talents or ju...
#93 of 312 Which Actor Would You Bring Back for One Final Movie? 190.4k VOTES We asked, you answered. Fans of the Ranker Facebook page chose which dead actors they’d like to bring back to life for just ...
#118 of 149 The Best Animated Voiceover Performances 143.7k VOTES This list contains information about the best animated voiceover performances in film, ranked by your votes. Several famous ...
#5 of 13 The Least Favorite Doctor From Doctor Who 4.7k VOTES There have been some brilliant actors who have played The Doctor while others have been a bit disappointing.  Either we...
#113 of 150 Who Do You Wish Would Guest Star on the Muppet Show? 7.8k VOTES Following their brand-new big screen Disney adventure, "The Muppets," Jim Henson's stable of beloved felt characte...
#448 of 862 Celebrity Death Pool 2016 370.1k VOTES Celebrity death pool 2016: Here's a large list of celebrities we think just might die this year. The only certainties in l...
#9 of 20 The Best Documentary Narrators 610 VOTES These celebrities have narrated the best-loved documentary films and series of recent memory. A few of them have even n...
Actors and Actresses Who Died in 2017 226.4k VIEWS Unfortunately, we say farewell to these actors and actresses who died in 2017. Whether these celebrity deaths were caused by...
Celebrities Who Died in 2017 396.6k VIEWS If you're wondering what celebrities died this year, this list of celebrity deaths in 2017 has them all. From actors to sing...
Famous People Named John 127k VIEWS There are a lot famous people named John out there. How many celebrities named John can you think of? The famous Johns ...
Actors Talk About The Worst Prosthetics And Makeup They Had To Wear 267k VIEWS Many films may rely on CGI to do a lot of heavy lifting when it comes to visual effects, but nothing can top the look of phy...
Actors in the Most Mel Brooks Movies 4.3k VIEWS Mel Brooks has directed some of the funniest movies of all time. He has also worked with several hilarious actors and actres...
50+ Famous Actors Who Are Aquarius 83 VIEWS What you'll find about a majority of these famous Aquarius actors on this list is that they can be a little eccentric and no...

John Hurt is also found on...