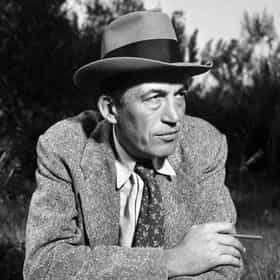 John Marcellus Huston (; August 5, 1906 – August 28, 1987) was an American film director, screenwriter, and actor. Huston was a citizen of the United States by birth but renounced U.S. citizenship to become an Irish citizen and resident. He returned to the United States, where he lived the rest of his life. He wrote the screenplays for most of the 37 feature films he directed, many of which are today considered classics: The Maltese Falcon (1941), The Treasure of the Sierra Madre (1948), The Asphalt Jungle (1950), The African Queen (1951), The Misfits (1961), Fat City (1972), and The Man Who Would Be King (1975). During his 46-year career, Huston received 15 Oscar nominations, winning ... more on Wikipedia

John Huston is ranked on...

#695 of 2,003 The Greatest Actors & Actresses in Entertainment History 1.7M VOTES The best actors and actresses of all time, male and female, ranked by film fans worldwide. This list of greatest actors and ...
#414 of 525 Famous Men You'd Want to Have a Beer With 1.8M VOTES If given the opportunity to sit down for a beer with any famous male figure, which famous men would you most want to get a d...
#24 of 139 The Greatest Auteurs in Film History 13k VOTES An auteur is a filmmaker or director whose personal, individual production style and creative flare gives his or her films a...
#225 of 255 Actors You Would Watch Read the Phone Book 318k VOTES List of actors who you would watch do something as mundane as read the phone book. Some of these guys are leading men, consi...
#19 of 82 The Best-Ever Oscar Winners for Writing (Adapted Screenplay) 1.7k VOTES Every year the Academy evaluates a year's worth of brilliant original screenplays and picks what they believe to be the best...
#43 of 51 Who Should Direct the New Star Wars Films? 8.5k VOTES It was announced that Disney has bought Lucasfilm for 4.05 billion dollars. Not only that, but they have also stated that th...
Famous Irish Americans 50.3k VIEWS This list includes famous Irish Americans of both today and throughout history, hot pics included! (Famous Irish people take...
Famous People Named John 123.4k VIEWS There are a lot famous people named John out there. How many celebrities named John can you think of? The famous Johns ...
Celebrities Who Have Been Married 4 (or More!) Times 1.1M VIEWS Famous people seem to have a knack for binge marrying. Divorces and weddings come and go with such frequency that it can bec...

John Huston is also found on...