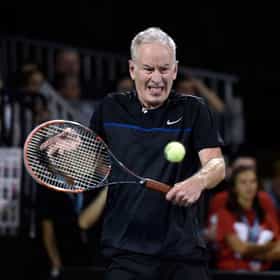 John Patrick McEnroe Jr. (born February 16, 1959) is an American retired tennis player. He was known for his shot-making artistry and volleying skills, and for confrontational on-court behavior that frequently landed him in trouble with umpires and tennis authorities. McEnroe attained the No. 1 ranking in both singles and doubles, finishing his career with 77 singles and 78 doubles titles; this remains the highest men's combined total of the Open Era. He won seven Grand Slam singles titles, four at the US Open and three at Wimbledon, and nine men's Grand Slam doubles titles. His singles match record of 82–3 in 1984 remains the best single season win rate of the Open Era. McEnroe also ... more on Wikipedia

How Superstar John McEnroe Became The Most Hated Tennis Champion of All Time 4.8k views John McEnroe blew the tennis world away when – as an amateur – he made it to the senior tournament of Wimbledon in 1977. Onl...

John McEnroe is ranked on...

John McEnroe is also found on...