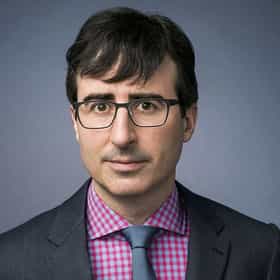 John William Oliver (born 23 April 1977) is an English comedian, writer, producer, political commentator, actor, and television host. Oliver started his career as a stand-up comedian, both in the United Kingdom and United States. He came to wider attention for his work on The Daily Show with Jon Stewart as its senior British correspondent from 2006 to 2013. Oliver won three Primetime Emmy Awards for his work as a writer on The Daily Show and was its guest host for an eight-week period in 2013. In addition to The Daily Show, Oliver co-hosted the satirical comedy podcast The Bugle (2007–2015) with Andy Zaltzman, with whom Oliver had previously co-hosted the radio series Political Animal, ... more on Wikipedia

John Oliver is ranked on...

#99 of 276 People who voted for John Oliver... People on the West Coast are 2x more likely to vote for this The Most Trustworthy Celebrities in the World 774k VOTES Trust: the belief that someone or something is reliable, good, honest, effective, etc. When it comes to celebrities, do any ...
#62 of 408 People who voted for John Oliver... People under 30 are 2x more likely to vote for this also upvote George W. Bush on The Worst U.S. Presidents The Funniest Stand Up Comedians Of All Time 999.8k VOTES A ranked list of the best stand up comedians in the history of the art form. First and foremost, all of the people on this l...
#807 of 1,042 Celebrity Death Pool 2020 36.5k VOTES They may be beloved performers, award winners, or game changers, but no matter how famous, you can’t escape death. This cele...
#11 of 12 Who Would Star In Beetlejuice If It Were Made Today 4.3k VOTES Tim Burton's Beetlejuice is a proud product of the 1980s. Considering our present day multiplexes and streaming pl...
#135 of 527 Famous Men You'd Want to Have a Beer With 1.8M VOTES If given the opportunity to sit down for a beer with any famous male figure, which famous men would you most want to get a d...
#94 of 257 Celebrities Who Should Run for President 603.2k VOTES Which celebrity would you actually vote for if they ran for President of the United States? If you can remember all the way ...
#106 of 166 The Most Ridiculous Political Pundits 162.5k VOTES This is a bipartisan list of the most over-the-top, spittle-stained, fist-thumping, hyperbolic political pundits of all ti...
#24 of 50 The Best Male Stand Up Comedians of the 2010s 3.4k VOTES The best 2010s stand up comedians are ranked on this list for your comedic pleasure. Who is your favorite male comic who def...
#134 of 184 Celebrities You Feel Like You Know 22.4k VOTES Everyone has a favorite celebrity who they think just gets them. You know, those celebrities you feel like you know. Wheth...
#21 of 22 Who Is America's Dad in 2019? 1.9k VOTES Every one of these gentlemen is a dad with kids of their own, but something about the things they say, the "dad jokes&q...
#76 of 116 Who Should Host the 2020 Oscars? 8.9k VOTES Who should host the next Oscars? Academy Award hosts throughout the years have been hilarious, fallen flat, caused controver...
#1 of 70 People who voted for John Oliver... also upvote Twilight Saga Franchise on The Most Overrated Movies of All Time The Greatest Daily Show Correspondents of All Time 5.3k VOTES You love to watch The Daily Show, we know you do. Whether it's your main source of news (pro tip: also watch the real news!)...
#9 of 50 The All-Time Greatest Late Night Talk Show Hosts 82k VOTES The all-time greatest late night talk show hosts have entertained us for years as we drift off to sleep. These hosts are cha...
#22 of 61 Celebrities You Want On Your Trivia Team 8.9k VOTES It’s easy to assume celebrities are not very intelligent and that they are just beautiful people reciting lines for our ente...
#1 of 53 Who Should Replace Jon Stewart as Host of The Daily Show? 6.9k VOTES UPDATE: On March 30, 2015, Comedy Central announced that Trevor Noah, The Daily Show correspondent since December 2014 will ...
Famous People Named John 121.7k VIEWS There are a lot famous people named John out there. How many celebrities named John can you think of? The famous Johns ...
40 Uncanny Celebrity Lookalikes That Are Hard to Believe 2.2M VIEWS They say that somewhere out there in the great wide world, everybody has a doppelgänger. A "doppelgänger&quot...
Famous People Whose Last Name Is Oliver 4.4k VIEWS Being a fairly common name, it's no surprise there are a lot of famous people with the last name Oliver. Do you recognize al...
'The Lion King' Voice Actors Vs. The Characters They're Voicing 793 VIEWS The Lion King has come full circle in 2019 and was granted new life as a live-action film complete with a score composed by ...
Celebrity Babies Who Were Born In 2018 43.8k VIEWS If you're interested in all things celebrity gossip, you probably keep tabs on the newest celebrity babies to hit the headli...

John Oliver is also found on...