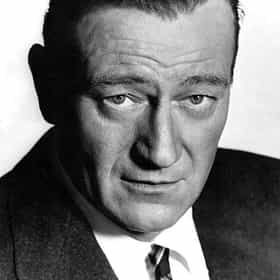 Marion Mitchell Morrison (born Marion Robert Morrison; May 26, 1907 – June 11, 1979), known professionally as John Wayne and nicknamed Duke, was an American actor, filmmaker, and Presidential Medal of Freedom recipient. He was among the top box office draws for three decades.Wayne was born in Winterset, Iowa but grew up in Southern California. He was president of Glendale High School class of 1925. He found work at local film studios. He lost a football scholarship to the University of Southern California as a result of a bodysurfing accident, and began working for the Fox Film Corporation. He appeared mostly in small parts, but his first leading role came in Raoul Walsh's Western The ... more on Wikipedia

John Wayne is ranked on...

John Wayne is also found on...