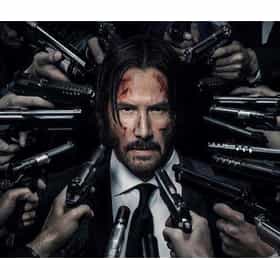 John Wick is an American media franchise which consists of action thriller films created by Derek Kolstad and directed by Chad Stahelski. Keanu Reeves stars as the eponymous character, a retired but deadly hitman seeking vengeance. In the first film (2014), when a gangster’s son steals his car and kills his dog, John Wick comes out of retirement, taking on his entire mob to get his revenge. In the 2017 sequel, forced to honor a debt from his past life, Wick assassinates a target he has no wish to kill, then faces betrayal at the hands of his sponsor. ... more on Wikipedia

Insane Behind The Scenes Stories From The John Wick Movies 93.3k views In 2014, John Wick opened in theaters and became the sleeper hit of the year. These behind-the-scenes stories from John Wick...
The Best 'John Wick' Fight Scenes 280 votes Choosing the best John Wick fight scenes is a difficult task, but we know you're up to it. The three movies in the series - ...
All Of The Assassins In The 'John Wick' Series 468 votes John Wick hit theaters in 2014 and went on to spawn a million memes about not killing the man's dog. But more than that, it ...
15 John Wick Memes Only True Dog Lovers Will Understand 2.6k votes There is very little we know about John Wick. We know he is good at his job in the assassination business. We know he loved ...
The 'John Wick' Series Is Actually An Adaptation Of Greek Mythology 6.1k views Since the first John Wick film was released in 2014, the franchise has captured audiences' attention and revitalized the act...
Get Pumped For 'Parabellum' on DVD With These Ranker Facts About 'John Wick' 811 views Five years after the original movie became a surprise hit, John Wick: Chapter 3 - Parabellum hit theaters on May 17, and wil...

John Wick Franchise is ranked on...

#28 of 112 The Very Best Movie Franchises 313.8k VOTES The best movie franchises of all time have brought us some of the best movies ever as well as some billion dollar films and ...
#1 of 45 The Greatest Action Film Franchises, Ranked 15.6k VOTES Yippee ki-yay, here are the best action movie series. Featuring martial arts movies, action comedies, spy thrillers, and mor...
#13 of 43 Great Movies with a Neon Aesthetic 2.7k VOTES Bright colors, vivid lights, and a modern aesthetic come together to create cinematic beauty in the best neon films. The t...