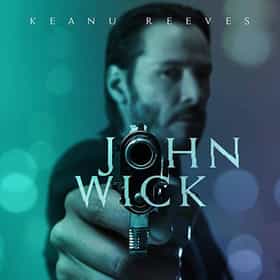 John Wick is a 2014 American action thriller film directed by Chad Stahelski and David Leitch. Starring Keanu Reeves, Michael Nyqvist, Alfie Allen, Adrianne Palicki, Bridget Moynahan, Dean Winters, Ian McShane, John Leguizamo, and Willem Dafoe, the film stars Reeves as John Wick. Stahelski and Leitch, both of 87Eleven Productions, directed the film together, though Leitch was uncredited. The film was written by Derek Kolstad, who completed the screenplay in 2012 and further developed it for Thunder Road Pictures. ... more on Wikipedia

The Best 'John Wick' Fight Scenes 280 votes Choosing the best John Wick fight scenes is a difficult task, but we know you're up to it. The three movies in the series - ...
What to Watch If You Love John Wick 177 votes Are you a fan of John Wick? If so, you can find plenty of similar shows and movies you might like as well—though they may no...
Get Pumped For 'Parabellum' on DVD With These Ranker Facts About 'John Wick' 811 views Five years after the original movie became a surprise hit, John Wick: Chapter 3 - Parabellum hit theaters on May 17, and wil...

John Wick is ranked on...

#23 of 160 The Best Movies of 2014 66.1k VOTES Sure there are the Oscars, Golden Globes, and a number of other award ceremonies that hand out trophies to movies that are v...
#305 of 599 The Greatest Epic Movies Ever Made 286.3k VOTES Need some movie ideas? Check out this list of the best epic films of all time, which encompasses some of the best movie...
#337 of 395 The Greatest Movie Themes 81.7k VOTES A memorable movie theme song is an underrated crucial element that helps turn a great movie into an iconic one. At its core,...
#8 of 108 The Greatest Directorial Debuts Of All Time 5.8k VOTES Believe it or not, some of the greatest films of all time were also some of the greatest directorial debuts to date. It...
#10 of 24 Great Movies Where The Hero Doesn't Change Or Grow At All 540 VOTES Capitalism loves to impose rules on product, because if you can figure out why something sells, you can reproduce its s...
#8 of 52 The Best Movies No One Saw in 2014 9.5k VOTES Let's face it, nowadays there are so many movies in theaters that it's almost impossible to see them all. Add to that the fi...
#1 of 15 Keanu Reeves's Coolest Action Movie Moments 460 VOTES Whether you think he's the quintessential big-screen idol or one of the worst actors in the world, you have to admit th...
#44 of 238 The Greatest Movies Of The 2010s, Ranked 40.6k VOTES You have a very important task ahead of you - voting for the best movies of the 2010s. While that may sound easy on the surf...
#8 of 735 The Greatest Action Movies of All Time 437.6k VOTES The greatest action movies of all time starring some of the best action stars to have ever fought on screen. The best action...
#2 of 223 The Best R-Rated Action Movies of All Time, Ranked 34.8k VOTES Ready to marathon the best R-rated action movies? You do? Great! But now you have to decide which R-rated action movies qual...
#3 of 25 The Top 25 Must-See Quintessential Action Movies 2.7k VOTES While some see action movies as a genre only of interest to macho frat boys, they are dead wrong. There are some essential a...
#23 of 53 The Best Movies About Grief, Ranked 775 VOTES This list contains information on the best films about grief, ranked from best to worst by user votes. The best films about ...
#5 of 97 The Very Best Shows & Movies About Revenge 585 VOTES They say revenge is a dish best served cold, but that's not the only saying about revenge. Another is that if you plan on se...
#5 of 31 The Best Action Movies of 2014 6k VOTES Buckle up! It's time to blast through the explosive list of the best action movies from 2014. We've got superheroes and muta...
#2 of 21 Best Club Fight Scenes in Movies 88 VOTES We compiled the best club fight scenes in movies. From Hollywood action movies to foreign films, the greatest fight scenes i...