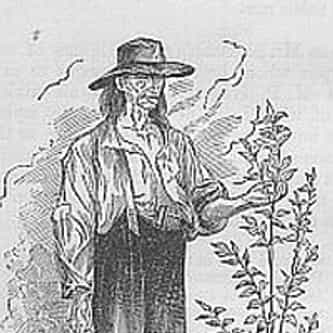 John Chapman (September 26, 1774 – March 18, 1845), better known as Johnny Appleseed, was an American pioneer nurseryman who introduced apple trees to large parts of Pennsylvania, Ontario, Ohio, Indiana, and Illinois, as well as the northern counties of present-day West Virginia. He became an American legend while still alive, due to his kind, generous ways, his leadership in conservation, and the symbolic importance he attributed to apples. He was also a missionary for The New Church ... more on Wikipedia

Johnny Appleseed IS LISTED ON

#353 of 438
1.2M VOTES Famous Men You'd Want to Have a Beer With
#1 of 17
2.7k VOTES Figures From American History We Didn't Know Lived Long Enough To Be Photographed
#11 of 21
1.6k VOTES What American Historical Figures' Graves Actually Look Like
#65 of 121
1.1k VOTES Who Is The Most Famous John In The World?
Men On Stamps: List Of Men On US Postage People On Stamps: List Of People On US Postage