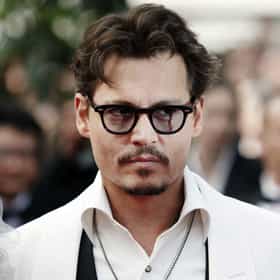 John Christopher Depp II (born June 9, 1963) is an American actor, producer, and musician. He has been nominated for 10 Golden Globe Awards, winning one for Best Actor for his performance of the title role in Sweeney Todd: The Demon Barber of Fleet Street (2008) and has been nominated for three Academy Awards for Best Actor, among other accolades. He is regarded as one of the world's biggest film stars.Depp rose to prominence on the 1980s television series 21 Jump Street, becoming a teen idol. He has gained critical praise for his portrayals of inept screenwriter-director Ed Wood in the film of the same name, undercover FBI agent Joseph D. Pistone in Donnie Brasco, author J. M. Barrie ... more on Wikipedia

Johnny Depp is ranked on...

Johnny Depp is also found on...