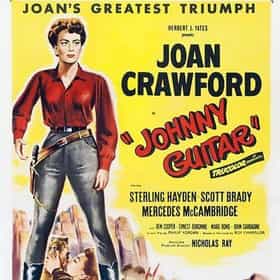 Johnny Guitar is a 1954 American Republic Pictures western drama film starring Joan Crawford, Sterling Hayden, Mercedes McCambridge, and Scott Brady. The screenplay was based upon a novel by Roy Chanslor. Though credited to Philip Yordan, he was merely a front for the actual screenwriter, blacklistee Ben Maddow. Filmed in Republic's Trucolor process, the film was directed by Nicholas Ray and produced by Herbert J. Yates. In 2008, Johnny Guitar was selected for preservation in the United States National Film Registry by the Library of Congress as being "culturally, historically, or aesthetically significant". ... more on Wikipedia

Johnny Guitar is ranked on...

Johnny Guitar is also found on...