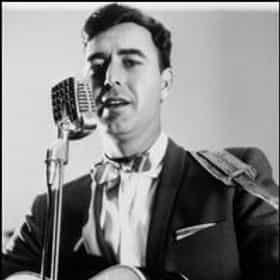 John LaGale "Johnny" Horton (April 30, 1925 – November 5, 1960) was an American country music, honky tonk and rockabilly singer and musician, during the 1950s and early 1960s, best known for his international hits beginning with the 1959 single "The Battle of New Orleans", which was awarded the 1960 Grammy Award for Best Country & Western Recording. The song was awarded the Grammy Hall of Fame Award and in 2001 ranked No. 333 of the Recording Industry Association of America's "Songs of the Century". His first No. 1 country song was in 1959, "When It's Springtime in Alaska (It's Forty Below)". Horton's music usually encompassed folk ballads ... more on Wikipedia

Johnny Horton is ranked on...

#82 of 334 People who voted for Johnny Horton... Men are 3x more likely to vote for this also upvote Die Hard Franchise on The Most Rewatchable Movies The Top Country Artists of All Time 202.6k VOTES One of the most distinct and popular American art forms is country music. The origins of country music began in mostly rural...
#385 of 519 Which Artist Would You Bring Back From The Dead To Write One More Song? 122.8k VOTES Many of the world's greatest musicians remain highly respected even in death. The world often mourns the loss of t...
#84 of 220 The Best Male Country Singers of All Time 188.6k VOTES Americans have always had a soft spot for country music, and in fact many of the best male country singers of all time are h...
#32 of 182 The Best Country Rock Bands and Artists 36.5k VOTES On the surface, the definition of country rock should be relatively simple. When people think of country rock music and coun...
#27 of 202 The Best Rockabilly Bands and Artists 37.1k VOTES The best rockabilly bands perform a specific style of rock and roll that first became popular in the U.S. in the early 1950s...
#16 of 42 The Best Honky Tonk Bands/Artists 2.8k VOTES To many music fans, honky tonk music encompasses if not a subgenre, then is a general name for old school, retro country mus...

Johnny Horton is also found on...