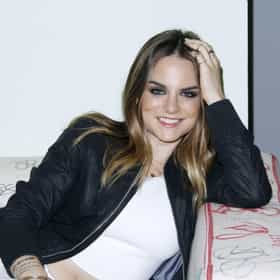 Joanna Noëlle Levesque (born December 20, 1990) is an American singer, songwriter, and actress. Raised in Foxborough, Massachusetts, she performed in various singing competitions as a child, and after competing on the television show America's Most Talented Kids in 2003, she was noticed by record producer Vincent Herbert who asked her to audition for Blackground Records. JoJo released her eponymous titled debut album in June 2004. "Leave (Get Out)", her debut single, reached number one on the US Billboard Pop songs chart, which made her the youngest solo artist to top the chart at 13 years old. The song peaked at 12 on the Billboard Hot 100 and was certified gold by the ... more on Wikipedia

Whatever Happened To JoJo? 36.4k views By the age of 13, Joanna “JoJo” Levesque was already on top of the Billboard charts with her debut single “Leave (Get Out).”...

JoJo is ranked on...

JoJo is also found on...