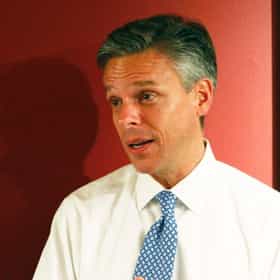 Jon Meade Huntsman Jr. (born March 26, 1960) is an American businessman, diplomat, politician, and the current Ambassador of the United States to Russia, serving from October 2017 to October 3, 2019. Huntsman was the U.S. Ambassador to Singapore from 1992 to 1993, the 16th Governor of Utah from 2005 to 2009 and the U.S. Ambassador to China from 2009 until 2011. He has served in the administrations of five Presidents and was a candidate for the 2012 Republican presidential nomination. On August 6, 2019, Huntsman submitted his resignation letter to President Donald Trump as Ambassador of the United States to Russia, effective October 3, 2019.In January 2014, Huntsman was named Chair of ... more on Wikipedia

#4 of 12 Dream Running Mates Hillary Should Consider 1.6k VOTES Hillary Rodham Clinton is running for president yet again. But who will she pick? This list of dream running mates for the C...
Forbes 400 Top Richest People in America 118.4k VIEWS The Richest People in America according to Forbes magazine. The 400 wealthiest Americans are listed here for you to sort thr...