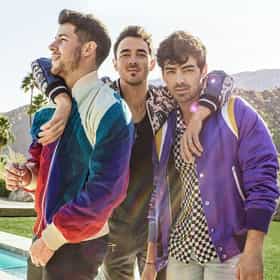 The Jonas Brothers are an American pop rock band. Formed in 2005, they gained popularity from their appearances on the Disney Channel television network. They consist of three brothers: Kevin Jonas, Joe Jonas, and Nick Jonas. Raised in Wyckoff, New Jersey, the Jonas Brothers moved to Little Falls, New Jersey, in 2005, where they wrote their first record that made its Hollywood Records release. In the summer of 2008, they starred in the Disney Channel Original Movie Camp Rock and its sequel, Camp Rock 2: The Final Jam. They also starred as Kevin, Joe, and Nick Lucas, the band Lucas in their own Disney Channel series Jonas, which was rebranded as Jonas L.A. after the first season and ... more on Wikipedia

Jonas Brothers is ranked on...

#198 of 358 The Worst Rock Bands of All Time 749.5k VOTES Here they are: the absolute worst rock bands in history, ranked from the most awful bands to the kind of okay but still pret...
#389 of 529 Things That Are Not As Cool As People Think They Are 1.1M VOTES Jorts are the dumbest things I've ever seen. Next to Toms shoes. Next to the Toyota Prius. Next to d-bags taking pictures of...
#7 of 1,038 The Worst Bands & Musicians of All Time 1.3M VOTES The worst bands in music history, ranked by music fans (and haters.) This list contains the most awful bands to listen to fr...
#39 of 115 The Best Musical Trios Of All-Time 35.7k VOTES Across all types of music what is the best 3 piece band ever? Add your own favorite band...heck even country works... countr...
#21 of 66 Which E! People's Choice Awards 2019 Music Nominees Will Win? 1.7k VOTES Topping the Billboard charts and holding the top ranks on iTunes and Spotify, the music nominees for the 2019 E! People...
#7 of 20 The Best Celebrity Versions Of The FaceApp Challenge 3.9k VOTES The FaceApp challenge swept the internet in July 2019. The challenge is simple: use the FaceApp app's "old&qu...
#96 of 139 The Best Musical Guests on 'The Tonight Show Starring Jimmy Fallon' in 2019 1.6k VOTES Update - Check out the musical guests on Fallon in 2020! This list contains all the 2019 musical guests on Jimmy Fallon. R...
#24 of 107 The Best Musical Artists From New Jersey 11.1k VOTES Here are the best artists and bands from New Jersey. Although it doesn't have an official state song, New Jersey h...
#53 of 107 People who voted for Jonas Brothers... Women are 2x more likely to vote for this The Greatest Teen Pop Bands & Artists 200k VOTES In the entirety of the music world, teen pop is one of the most popular genres that resonates with its listeners the most. T...
#231 of 539 The Greatest Pop Groups & Artists of All Time 593.5k VOTES Update: Follow Ranker's official New Pop 2020 playlist on Spotify! For years, pop music has dominated your radio...
#5 of 56 The Best Pop Artists Of 2020, Ranked 4.2k VOTES Update: Follow Ranker's official New Pop 2020 playlist on Spotify! Here are the best pop artists of 2020, r...
#32 of 56 The Best Bubblegum Pop Groups & Singers of All Time 8.1k VOTES If you grew up in the mid-1960s through the early-1970s, it's highly likely that you became a fan of bubblegum pop. The genr...
Celebrities Who Have Dissed Justin Bieber 134k VIEWS In the relatively short number of years Justin Bieber has been around he's done an impressive amount of stupid things. When ...
#124 of 152 The Best Musicians Who Performed on SNL In The '00s 398 VOTES From the 9/11 attacks to the writers strike that shortened season 33 to some big cast shakeups mid-decade, Saturday Night Li...
Billboard's Top Musical Artists of 2008 6.1k VIEWS Billboard's Top Musical Artists of 2008. Some of these individuals are in the running to be the top recording artists of a...

Jonas Brothers is also found on...