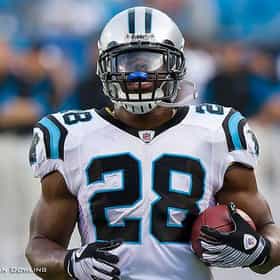 Jonathan Creon Stewart (born March 21, 1987) is a former American football running back. He played college football at the University of Oregon and was selected by the Carolina Panthers in the first round (13th overall) of the 2008 NFL Draft. He played 10 seasons with Carolina, making the 2016 Pro Bowl, before spending one season with the New York Giants. Following the 2018 season, Stewart signed a one-day contract with Carolina and retired as a Panther. ... more on Wikipedia

Jonathan Stewart is ranked on...