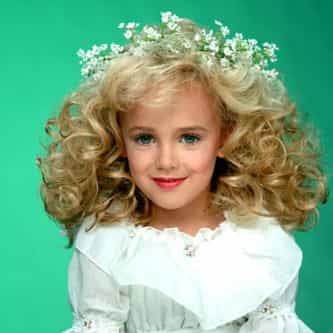 JonBenét Patricia Ramsey (; August 6, 1990 – December 25, 1996) was an American child beauty queen who was killed at the age of 6 in her family's home in Boulder, Colorado. A lengthy handwritten ransom note was found in the house. Her father John found the girl's body in the basement of their house about eight hours after she had been reported missing. She sustained a broken skull from a blow to the head and had been strangled; a garrote was found tied around her neck. The autopsy ... more on Wikipedia

JonBenét Ramsey IS LISTED ON

#88 of 753
2.3M VOTES People We Wish Were Still Alive People over 50 are 2x more likely to vote for this
1.1M VIEWS 12 Disturbing Ransom Notes with Strange and Tragic Consequences
1.4M VIEWS Famous Murders That Remain Unsolved
146k VIEWS The Most Famous Unsolved Murders In The US
14k VIEWS 8 Ridiculous Conspiracy Theories That Blame Satanists For Almost Everything
Famous People From Georgia Famous People From Atlanta Famous People Born in 1990 Famous People Who Died in Colorado