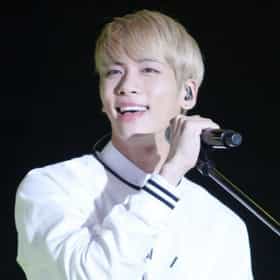 Kim Jong-hyun (April 8, 1990 – December 18, 2017), better known mononymously as Jonghyun, was a South Korean singer-songwriter, record producer, radio host, and author under the SM Entertainment label. He was the main vocalist of the South Korean boy band Shinee for nine years, releasing twelve albums with the group in both Korean and Japanese. Jonghyun remained musically active as main vocalist of Shinee and as a solo artist until his death on December 18, 2017, when he committed suicide by carbon monoxide poisoning. His final album, Poet | Artist, was released posthumously on January 23, 2018. ... more on Wikipedia

Kim Jonghyun is ranked on...

#19 of 149 The Hottest Guys in K-pop 531.1k VOTES K-pop fans, it's time to vote for the hottest guys in Kpop! Featuring the best looking Kpop idols, cutest maknaes, and the s...
#9 of 108 The Best K-Pop Solo Artists 462k VOTES Including some of the best solo artists of 2019 as well as new solo debuts, the most popular K-pop solo artists ra...
#24 of 80 The Best K-pop Solo Artists Of The 2010s 26.2k VOTES One is never the loneliest number for the best K-pop solo artists of the decade, ranked by fans everywhere. F...
Famous Aries Male Celebrities 25.7k VIEWS Aries tend to have confidence and charisma to spare. Combined with their tendency to be bold in their choices, they have all...
Celebrities Who Died in 2017 396.6k VIEWS If you're wondering what celebrities died this year, this list of celebrity deaths in 2017 has them all. From actors to sing...
Full List of K-pop Idol Instagram Accounts 90.2k VIEWS Love peeking into the life that your favorite Kpop idol leads? Fret not! You can do so now due to a wonderful invention call...
#5 of 5 Vote: Who Is The Best SHINee Member? 4.9k VOTES Every K-pop fan knows who their favorite SHINee member is, but who is the best member of SHINee? The four member boy gr...
Famous People Named Kim 33.6k VIEWS List of famous people named Kim, along with photos. How many celebrities named Kimberly can you think of? The famous Kims be...
Musicians Who Died in 2017 628k VIEWS Our hearts break for the talented musicians who died in 2017. Whether you were a fan of these recently deceased musicians or...

Kim Jonghyun is also found on...