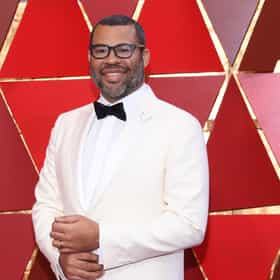 Jordan Haworth Peele (born February 21, 1979) is an American actor, comedian, and filmmaker. He is best known for his film and television work in the comedy and horror genres.Peele's breakout role came in 2003 when he was hired as a cast member on the Fox sketch comedy series Mad TV, where he spent five seasons, leaving the show in 2008. In the following years, he and his frequent Mad TV collaborator, Keegan-Michael Key, created and starred in their own Comedy Central sketch comedy series Key & Peele (2012–2015). In 2014, they recurred together playing FBI agents in season one of FX's anthology series Fargo. He co-created the TBS comedy series The Last O.G. (2018–present) and the ... more on Wikipedia

The Best 'Us' Movie Quotes 455 votes The horror movie Us follows a family whose summer vacation has some uninvited guests. Themselves. Written and directed by Jo...
The Best Characters In Jordan Peele Movies 190 votes Considering that he only has two films to his credit as a director, there are a lot of great characters in Jordan Peele's mo...
14 Things Jordan Peele Did Before 'Key & Peele' 1.3k views Comedian, writer, and director Jordan Peele's career took off following the success of MADtv and Key & Peele. Since comp...

Jordan Peele is ranked on...

#150 of 408 The Funniest Stand Up Comedians Of All Time 1M VOTES A ranked list of the best stand up comedians in the history of the art form. First and foremost, all of the people on this l...
#30 of 40 Actors Who Are Having Their Best Year In 2019 28k VOTES 2019 has proved to be the best year for a lot of actors, old and new. From landing multiple roles or headlining in the year'...
#9 of 144 The Best Hot Ones Guests Ever 22.3k VOTES Hot Ones is the show with hot questions and even hotter wings. Hot Ones has taken YouTube by storm, pitting various A-list c...
#14 of 14 Weird Things Academy Award Winning Actors Have Done With Their Oscar Statues 1.3k VOTES Where do actors keep their Oscar statues after winning them? As winning an Oscar is the highest honor you can achieve i...
#5 of 39 The 39 Biggest Snubs Of The 2020 Academy Awards 2.2k VOTES The 2020 Academy Award nominations celebrate a year of achievement in film, but not everyone who gave a great performan...
#1 of 35 The Most Successful Mad TV Cast Members 4.6k VOTES List of the most successful Mad TV cast members, as ranked by fans and critics. From 1995-2009, the sketch comedy show Mad T...
#6 of 72 The Best-Ever Oscar Winners for Best Writing (Original Screenplay) 2.8k VOTES Every year the Academy evaluates a year's worth of brilliant original screenplays and picks what they believe to be the best...
#2 of 81 Celebrities Who Made The Biggest Cultural Impact In 2017 5.7k VOTES The celebrities who influenced culture in 2017 were fashion innovators, outspoken activists, social media influencers, cutti...
#11 of 41 The Most Influential People in 2018 29.6k VOTES From Oscar winners and musicians to political figures and activists, this list compiles the most influential people of ...
#4 of 12 The Biggest Oscar Surprises of 2018 501 VOTES The Oscars are never entirely predictable and there were plenty of 2018 Oscar surprises in the mix when nominees were announ...
#23 of 29 The Biggest Golden Globes Snubs of All Time 2.4k VOTES It used to be that the Golden Globes was a fairly accurate indicator for the Oscars. More and more, that’s not true as the t...
#2 of 5 All the 2018 Oscar Nominees for Best Director, Ranked 541 VOTES The 2018 Best Director nominees have finally arrived! This year, five directors have been nominated for the coveted Bes...
#5 of 12 12 Filmmakers Who Should Get To Make The Next 'A Nightmare on Elm Street' Film 93 VOTES With news emerging in November 2019 that writer and director Wes Craven's estate had begun actively seeking pitches for...
#10 of 29 Best Dressed Celebs At The 2018 Oscars 6.6k VOTES The 2018 Oscars featured some of Hollywood's best and brightest bringing out their most glamorous looks.&nbsp...
#74 of 80 Who Is The Most Famous Actor In The World Right Now? 159.6k VOTES With so many up-and-coming stars, as well as established celebs at the peak of their career, who really is the most fam...

Jordan Peele is also found on...