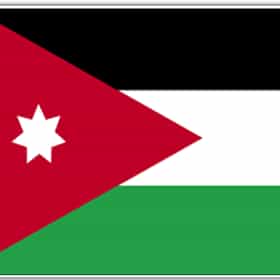 Jordan, officially the Hashemite Kingdom of Jordan, is an Arab kingdom in the Middle East, on the East Bank of the Jordan River. Jordan is bordered by Saudi Arabia to the south and east, Iraq to the north-east, Syria to the north, and Israel and Palestine to the west. After the post-World War I division of West Asia by Britain and France, the Emirate of Transjordan was officially recognized by the Council of the League of Nations in 1922. In 1946, Jordan became an independent sovereign state officially known as the Hashemite Kingdom of Transjordan. After capturing the West Bank during the 1948 Arab–Israeli War, Abdullah I took the title King of Jordan. The name of the state was changed ... more on Wikipedia

Jordan is ranked on...

Jordan is also found on...