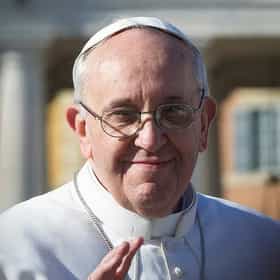 Pope Francis (Latin: Franciscus; Italian: Francesco; Spanish: Francisco; born Jorge Mario Bergoglio; 17 December 1936) is the head of the Catholic Church and sovereign of the Vatican City State. Francis is the first Jesuit pope, the first from the Americas, the first from the Southern Hemisphere, the first to visit the Arabian Peninsula, and the first pope from outside Europe since the Syrian Gregory III, who reigned in the 8th century. Born in Buenos Aires, Argentina, Bergoglio was ordained a Catholic priest in 1969, and from 1973 to 1979 was Argentina's provincial superior of the Society of Jesus (Jesuits). He became the Archbishop of Buenos Aires in 1998 and was created a cardinal ... more on Wikipedia

Pope Francis is ranked on...

#293 of 1,042 Celebrity Death Pool 2020 66.6k VOTES They may be beloved performers, award winners, or game changers, but no matter how famous, you can’t escape death. This cele...
#120 of 2,831 People who voted for Pope Francis... People over 50 are 2x more likely to vote for this Women are 2x more likely to vote for this The Most Influential People of All Time 2.4M VOTES This is a list of the most influential people of all of human history. This means that the individuals on this list have had...
#291 of 525 Famous Men You'd Want to Have a Beer With 1.8M VOTES If given the opportunity to sit down for a beer with any famous male figure, which famous men would you most want to get a d...
#456 of 530 Annoying Celebrities Who Should Just Go Away Already 1.2M VOTES The most annoying celebrities, ranked by entertainment fans themselves. These annoying celebs are obnoxious, overexposed, ...
#36 of 73 The Most Immature Adult Celebs 26k VOTES When it comes to celebrities who don't act their age, Hollywood pretty much has an endless supply. Not that acting like a ...
#358 of 1,452 Celebrity Death Pool 2018 477.7k VOTES Welcome to Celebrity Death Pool 2018! In increasingly uncertain times, there remains one constant in life - we all die. Cele...
#64 of 91 People who voted for Pope Francis... are 6x more likely to vote for Martin Luther King, Jr. on this list are 7x more likely to vote for Nelson Mandela on this list The Most Enlightened Leaders in World History 43.7k VOTES Enlightened leadership takes on many forms. Sometimes, especially in the ancient world, it was the codifying of laws and pre...
#648 of 868 Celebrity Death Pool 2016 370.1k VOTES Celebrity death pool 2016: Here's a large list of celebrities we think just might die this year. The only certainties in l...
#5 of 61 Celebrities You Want On Your Trivia Team 8.9k VOTES It’s easy to assume celebrities are not very intelligent and that they are just beautiful people reciting lines for our ente...
#24 of 104 People who voted for Pope Francis... People in the Midwest are 2x more likely to vote for this All of the Things That Were a Thing in 2015, Ranked 21.3k VOTES 2015 was a year full of things that were definitely things. 2015 trends ran the gamut from hashtags to news stories that wer...
#3 of 26 The Most Influential People of 2014 6.6k VOTES The most influential people of 2014 changed the world through politics, religion, activism, and entertainment. This list ran...
#34 of 52 Who Should Be TIME Magazine's Person of the Year 2015? 9.9k VOTES TIME magazine is currently polling for who should be its Person of the Year in 2015, with a wide selection of world lea...
#4 of 21 Who Should Be Named TIME's Person Of The Year For 2017? 6k VOTES UPDATE: On December 6, 2017, Time announced "The Silence Breakers" of the #MeToo Movement as the 20...
Celebs (Including Republicans) Who Say Trump Is Horrible 29.5k VIEWS President Donald Trump's famous haters have no qualms being open with their disdain for him. Seemingly every day, Trump...
Famous People Whose Last Name Is Francis 1k VIEWS Being a fairly common name, it's no surprise there are a lot of famous people with the last name Francis. Do you recognize a...

Pope Francis is also found on...