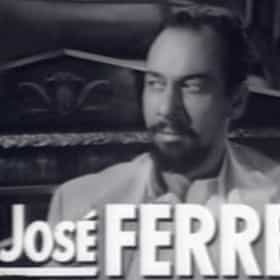 José Vicente Ferrer de Otero y Cintrón (January 8, 1912 – January 26, 1992), known as José Ferrer, was a Puerto Rican actor and theatre and film director. He was the first Puerto Rican-born actor, as well as the first Hispanic actor, to win an Academy Award (in 1950 for Cyrano de Bergerac). In 1947, Ferrer won the Tony Award for his theatrical performance of Cyrano de Bergerac, and in 1952, he won the Distinguished Dramatic Actor Award for The Shrike, and also the Outstanding Director Award for directing the plays The Shrike, The Fourposter, and Stalag 17. Ferrer's contributions to American theatre were recognized in 1981, when he was inducted into the American ... more on Wikipedia

José Ferrer is ranked on...

#51 of 56 The Greatest Non-White Actors in Hollywood 3.7k VOTES With audiences pushing Hollywood towards increased diversity both on- and off-screen, now is the perfect time to celebrate t...
#73 of 82 The Best Actors to Ever Win Best Actor in a Leading Role 30.1k VOTES Every year the Academy evaluates a year's worth of brilliant performances and picks what they believe to be the best of the ...
The Locations of All Hollywood Walk of Fame Stars 419.2k VIEWS A list of stars on the Hollywood Walk of Fame, with photos. This list includes all television and movie stars. Acquiring a s...
Celebrities Who Have Starred on Broadway 12.6k VIEWS Most actors don't just stick to the screen. What celebrities have also been in Broadway plays? The celebrities on this list,...
Famous People Named Jose 11.3k VIEWS If your name is Jose, then you're in some great company. Here's our list of the most famous people named Jose, including pho...
Famous Celebrities Born With Cleft Lips 1.1M VIEWS This list of celebrities with cleft lips is loosely ranked by fame and popularity. A cleft lip is a deformity caused by abno...
Famous Princeton Eating Club Members List 9k VIEWS List of Famous Princeton Eating Club Members ranked by fame and popularity. Princeton's Eating Clubs serve as a place where ...

José Ferrer is also found on...