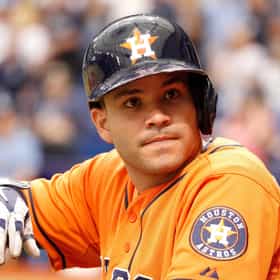 José Carlos Altuve (born May 6, 1990) is a Venezuelan professional baseball second baseman for the Houston Astros of Major League Baseball (MLB). The Astros signed Altuve as an amateur free agent in 2007, and he made his major league debut in 2011. A right-handed batter and thrower, as of 2017 he was the shortest active MLB player at 5 feet 6 inches (1.68 m). His listed weight is 165 pounds (75 kg). From 2014 to 2017, Altuve recorded at least 200 hits each season and led the American League (AL) in the category. He won three batting championships in that span. A six-time MLB All-Star, Altuve has been voted the starting second baseman for the AL in the All-Star Game four times. ... more on Wikipedia

José Altuve is ranked on...

#184 of 620 The Greatest Baseball Players Of All Time 515.9k VOTES This greatest baseball players list represents the combined lists of baseball fans everywhere. Anyone can make their own lis...
#13 of 148 The Greatest Hispanic MLB Players Ever 13k VOTES Who are the best Hispanic baseball players? Who are the greatest Hispanic MLB players? This list of the best Hispanic MLB pl...
#5 of 286 People who voted for José Altuve... also upvote Rocky Franchise on The Best Sports Movies also upvote Star Trek Franchise on The Best Space Movies The Top Current Baseball Players 219.5k VOTES Who do you think should make the list of the best current players in baseball? Ranked by fans, critics, and sports analysts,...
#80 of 710 The Best Hitters in Baseball History 270.1k VOTES The best hitters in baseball history are those who hold the all-time hitting records in Major League Baseball, change the ga...
#1 of 107 The Best Current Baseball Players Under 6 Feet Tall 4.2k VOTES The shortest players in major league baseball have made almost as big an impact on the game as their taller counterparts. So...
#192 of 202 The All-Around Best Athletes of 2018 32.9k VOTES When it comes to being an all-around best athlete, you're not just talking about the leading scorers of all time, or th...
#5 of 41 Who Will Win the 2019 American League MVP? 1.6k VOTES The group of candidates for who will win AL MVP in 2019 is full of the usual suspects. The best players in baseball alw...
#2 of 58 Who Will Make the 2018 MLB All-Star Game? 7.4k VOTES Once opening day has passed, it's never too early to start making your 2018 MLB All-Star Game predictions. Spring already sp...
#10 of 50 The 50 Most Valuable MLB Players For Fantasy Baseball In 2019 4.1k VOTES Opening Day 2019 is around the corner, and while MLB managers focus on setting their roster and choosing an opening day...
#4 of 40 The Best MLB Pinch Hitters of 2014 379 VOTES Who is the best MLB pinch hitter of the 2014 season? This list includes pinch hitters form such teams in both the American...
#56 of 85 The Best Athletes of 2014 1.4k VOTES Ah... to be the best there is in your game. 2014 was a big year for sports, with major international competitions like the O...
Famous People Named Jose 11.3k VIEWS If your name is Jose, then you're in some great company. Here's our list of the most famous people named Jose, including pho...

José Altuve is also found on...