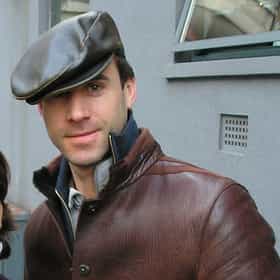 Joseph Alberic Twisleton-Wykeham-Fiennes (; born 27 May 1970), known as Joseph Fiennes, is an English film and stage actor. He is known for his portrayals of William Shakespeare in Shakespeare in Love (1998), for which he was nominated for the BAFTA Award for Best Actor in a Leading Role and the Screen Actors Guild Award for Outstanding Performance by a Male Actor in a Leading Role, Sir Robert Dudley in Elizabeth (1998), Commisar Danilov in Enemy at the Gates (2001), and Monsignor Timothy Howard in the second season of the TV series American Horror Story (2012–2013). His role in the 2017 TV drama series The Handmaid's Tale was nominated for the Primetime Emmy Award for Outstanding ... more on Wikipedia

Joseph Fiennes is ranked on...

#125 of 194 The Hottest Men Over 40 1.1M VOTES The hottest men in Hollywood? Turns out, the older they get, the more we like them! Like fine wines, tweens, and your favori...
#250 of 335 The Greatest Actors Who Have Never Won an Oscar (for Acting) 450k VOTES There are many actors who haven't won an Oscar. For 95 percent of the acting population, there is probably a good reason the...
#574 of 2,001 People who voted for Joseph Fiennes... also upvote Harry Potter Franchise on The Most Rewatchable Movies also upvote Lord of the Rings Franchise on The Best Movies of All Time The Greatest Actors & Actresses in Entertainment History 1.7M VOTES The best actors and actresses of all time, male and female, ranked by film fans worldwide. This list of greatest actors and ...
#274 of 282 The Best (Male) Actors Working Today 1.5M VOTES The best actors working today include Hollywood legends, Academy Award winners and many of the top up and coming actors in t...
#20 of 38 People who voted for Joseph Fiennes... People in the Northeast are 2x more likely to vote for this The Top Casting Choices for the Next James Bond Actor 230.1k VOTES Who is going to be the new James Bond actor now that Daniel Craig doesn't want to be 007 in the next James Bond outing? Sinc...
#163 of 273 People who voted for Joseph Fiennes... also upvote Harry Potter Franchise on The Most Rewatchable Movies The Greatest British Actors of All Time 281.6k VOTES This list of the greatest British actors of all time has been ranked by fans of the films and TV shows in which these men ha...
#1 of 69 Celebrities with the Weirdest Middle Names 34.4k VOTES Have you always wondered about celebrity middle names? Just like regular people, many celebs and super famous people have we...
#223 of 514 Celebrities Nobody Cares About Anymore 3.4M VOTES Some of the greatest actors of all time have, in recent days, turned into a bunch of washed-up hacks that would be somehow b...
#72 of 114 The Best English Actors of All Time 78.3k VOTES Some of the best actors of all time hail from England, and whether you love these English men for their acting talents or ju...
#9 of 19 The Hottest Leading Men In Period Film 8.1k VOTES Who says history buffs don't enjoy a few buff men in their history? As much as our modern day sensibilities might not always...
Where You've Seen the American Horror Story Actors Before 240.4k VIEWS Each new season of American Horror Story, one of television's creepiest shows, seems to be the most skin-crawlingl...
Actors Who Turned Down Oscar-Winning Roles 2.2k VIEWS How many times do we hear that an actor "owns" a movie role - that the critics and/or the audience couldn't imagin...
Famous People Named Joe & Joseph 92.3k VIEWS List of famous people named Joe, Joseph, or Joey, along with photos. How many celebrities named Joe can you think of? The fa...
Famous People with Long Names 103.8k VIEWS A list of celebrities who have very long names. Some have multiple middle names, and some are from cultures where their su...
Celebrities with Twins 77.6k VIEWS A List of Celebrities with Twins, with photos! This list includes both fraternal and identical twins. Only 2% of the world's...

Joseph Fiennes is also found on...