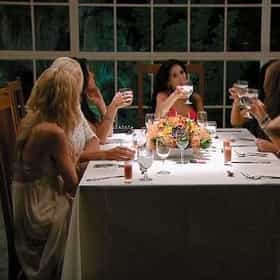 Joyce Marie Giraud Mojica (born April 4, 1975), also known as Joyce Giraud de Ohoven, is a Puerto Rican actress, model, philanthropist, film and television producer. In 1998, Giraud was crowned Miss Universe Puerto Rico 1998, and represented Puerto Rico at Miss Universe 1998, where she placed as the second runner-up. She has since appeared in acting roles in television and film, and beginning in 2013 was a housewife on The Real Housewives of Beverly Hills for its fourth season. ... more on Wikipedia

Joyce Giraud is ranked on...

#82 of 236 The Best Drag Queens Of All Time 337.3k VOTES Who are the best famous drag queens, female impersonators, and drag artists? This list ranks them all, with pictures of all ...
#5 of 50 The Most Annoying Real Housewives of All Time 30k VOTES Nearly every season of every city, The Real Housewives manages to showcase some of the most annoying women on reality TV (an...
#5 of 54 The Absolute Worst Real Housewives 34.9k VOTES The Bravo reality TV Real Housewives franchise features some of the biggest personalities in the reality television world, a...
Famous People Named Joyce 3.4k VIEWS Who knew there were so many famous people named Joyce in the world? Our list of celebrities named Joyce includes pictures ...

Joyce Giraud is also found on...